The girls soccer team defeated Leavenworth 9-1 on Tuesday, May 16 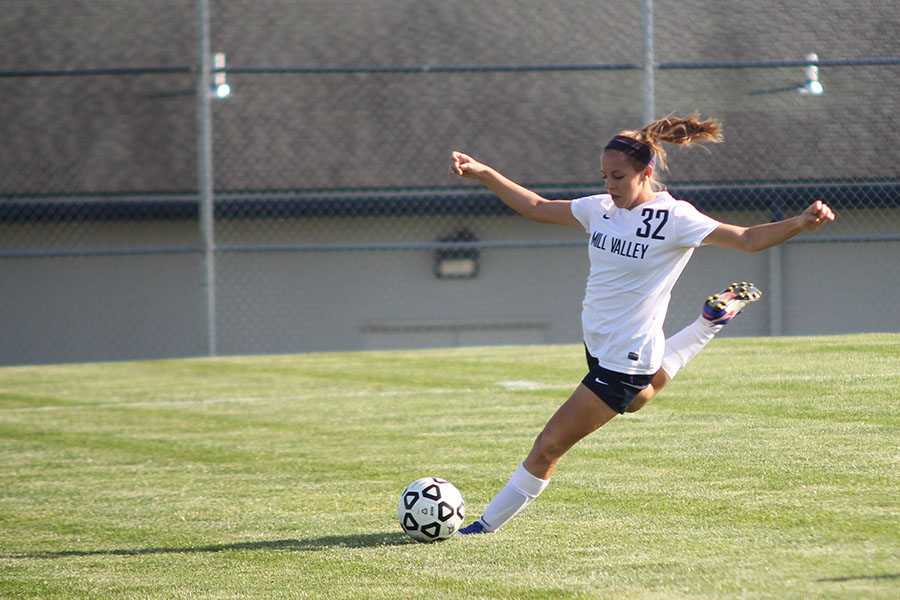 Sophomore Caroline Rutledge prepares to kick the ball to an open player.

Katya Gillig, Mill Valley News editor-in-chief
The girls soccer team beat Lancing 9-1 on Tuesday, May 16 in the first game of the regional tournament.

According to junior defender Cori Carver, the game allowed the team to get back into rhythm.

“It gave us opportunities to play simple and playing our game,” Carver said.

Goals by sophomore midfielder Lexi Ballard in the 28th minute and by junior forward Addie Hinkle in the 36th minute added to the score.

Head coach Arlan Vomhof believes second half adjustments lead to opening up the offense in the second half.

“We calmed down. We had the wind the first half and everyone was just trying to go go go. We talked at half time about how we had to put the ball on the ground,” Vomhof said. “Our first twenty minutes were pretty bad we weren’t playing together at all we just talked about some stuff that we needed to put it on the ground and now that we were going against the wind. We definitely had to possess the ball a bit instead of just relying on long passes.”

The Lady Jags opened up the second half strong with a goal by sophomore forward Shyanne Best in the 43rd minute. Two goals by junior forward Erin Olsen were also made in the 56th and 58th minutes.

With just five minutes left, Leavenworth scored to make the score 9-1. This would be the final score.

Vomhof used the game to help prepare for the next round.

The Jaguars will play St. Thomas Aquinas on Thursday, May 18 in the second round of the regional tournament.