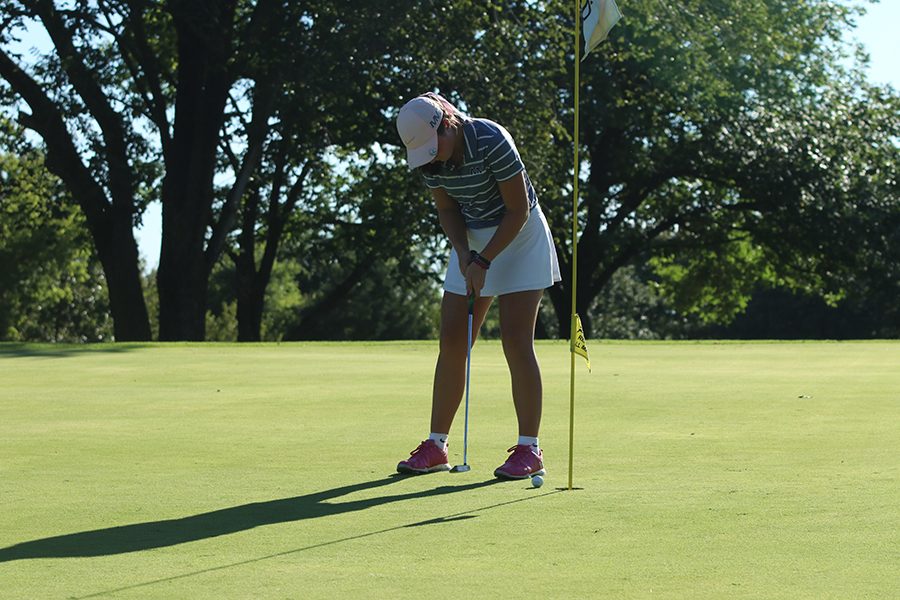 After shooting nine holes, the girls golf team places first with a score of 164 at Sunflower Hills Golf Course on Monday, Sept. 23. Sophomore Libby Green placed third with a score of 39, three over par. In addition, senior Hannah Davie, junior Megan Haymaker and junior Ava Van Inwegen placed fifth, ninth and tenth with scores of 40, 42 and 43.

Green attributes their win to the girls’ competitiveness and mental toughness.

“We did really well and I am proud of how we played. The competition was tough, but we got through it and won,” Green said. “Our competitive spirit shone through and we all kept our emotions in check.”

“This tournament had less [schools] then normal, but it was very competitive and full of great teams,” Van Inwegen said. “[Going into the tournament] I wasn’t expecting much due to the competitiveness but I was very happy with the end results.”

Despite her success, Green believes that she still has room for improvement.

Sunflower Hills Golf Course was a good place for a tournament because the team often practices there and are familiar with the terrain, according to Haymaker.

“[Going into the tournament, I hoped to] try my best and take advantage of the course because I have played it many times,” Haymaker said. “We usually have practice [at Sunflower HIlls] once a week.“

The tournament was unique because the team golfed nine holes, instead of the usual 18. According to Haymaker, the shortened course adds stress to the tournament.

“[With nine hole tournaments] I feel like there is less time to recover if I have a bad hole,“ Haymaker said. “I feel like I need to start playing good from the start.”

Van Inwegen believes that the team is satisfied with the results of the tournament.

“Everyone on our team played well and [we] were mentally tough,” Van Inwegen said. “We were all happy.”

Van Inwegen believes that the team’s dynamic helps them improve their scores.

“[Playing with our best friends] helps us want to play better for our teammates,” Van Inwegen said. “We definitely can be competitive among each other.”