With two players in the top three, the girls golf team brought home the school’s first 6A title on Tuesday, Oct. 16 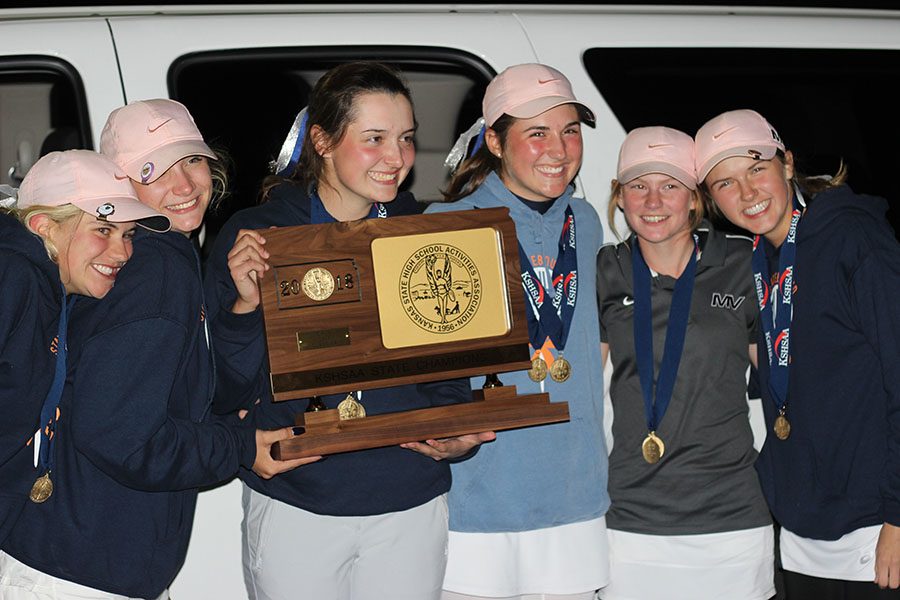 The girls golf team smiles with their first place trophy after the 6A state tournament in Salina, Kansas, making them the first 6A champions in Mill Valley's history. Senior Sarah Lawson placed second individually. "I could not be happier for us," Lawson said. "I am so proud of the girls I played with and I could not asked for a better group."

The girls golf team placed first in the state competition with a score of 323 strokes on Tuesday, Oct. 16. This win marks the first 6A state title and the first female team to win a state title for the school. Senior Sarah Lawson placed second with a score of 3-over 73 and freshman Libby Green placed third with 4-over 74.

Going into the tournament, head coach Chris Wallace had high hopes for the team based on their performance throughout the season.

“We’ve been competing at a very high level, winning tournaments, placing at tournaments as a team,” Wallace said. “Knowing the schools that were at this event, we definitely felt like there was that opportunity to do something that we’ve never done before.”

2018 6A girls golf state champions arriving to the school in style pic.twitter.com/m5BVGosRTo

After placing fifth at 5A state last year, Lawson believes that the team was able to have greater success.

“This year, [returning members] had a little more experience, a little more confidence,” Lawson said. “Everyone was shooting a little bit lower and we had a freshman who was already shooting low 80s.”

While on the course, Green tried not to think ahead in order to maintain her focus on the competition.

“On the course, I wasn’t trying to think about the next hole, or what happened on the last hole,” Green said. “I was thinking about what was happening right now, what shot I was going to hit, and how I was going to hit it. I was staying in the moment.”

Despite inclement weather, the team was able to practice throughout the week, traveling more than half an hour, according to Wallace. All of their hard work left them feeling ready for state.

“We definitely felt prepared for the challenge of competing at the 6A level and we were excited for it,” Wallace said.

As the team competed together throughout the season, they became very close, “like a family”, according to Green.

With the state trophy pic.twitter.com/BzA0u4JREW

Lawson echoed this sentiment and expects the team to have continued success.

“I love these girls so much and I’m so proud of each and everyone of them,” Lawson said. “I am very excited to see what they can do in the future.”

With only one member of the team graduating, Wallace feels hopeful for the future.

“It really sets the bar high and we have so much talent coming back, there’s really no reason why we can’t continue to be competitive and compete at this high level again,” Wallace said. “It’s not that a repeat is ensured, but I definitely feel like we have the talent and we have the ability to continue to fight for these opportunities.”