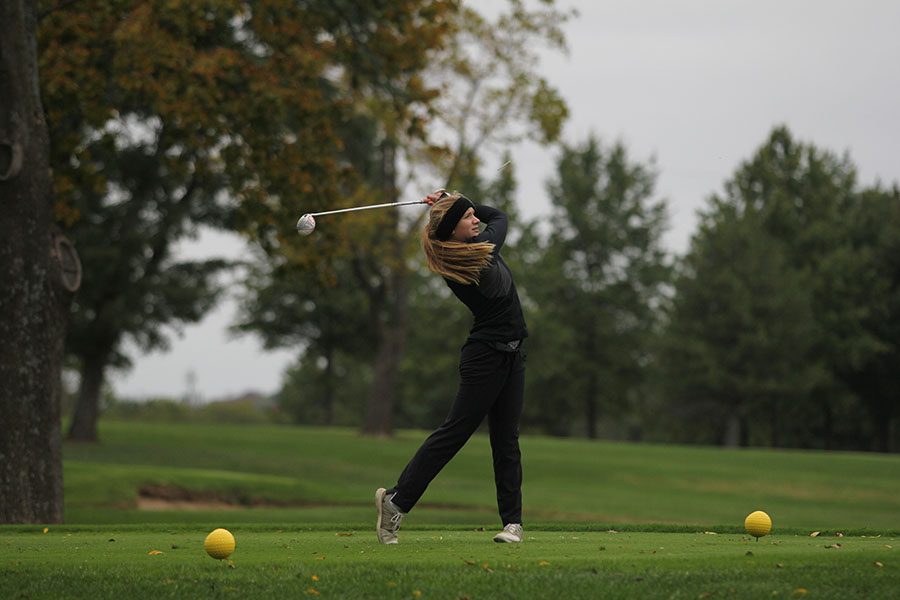 Using her driver, freshman Caroline Lawson hits the ball off the tee at the 5A regionals golf tournament on Tuesday, Oct. 10.

On Tuesday, Oct. 10, the girls golf team played in the regional tournament at Lady Sykes golf course in Overland Park. Senior Bella Hadden received a score of 38, getting first overall, and junior Sarah Lawson placed fourth with a final score of 41.

As teams were nearing the end of the ninth hole, the weather worsened and Lawson headed indoors with the rest of the team. The two-hour rain delay shortened the tournament from 18 holes to nine holes. The KSHSAA rulebook states that the amount of holes can be changed in order to speed up the tournament.

Hadden said she had a more difficult time playing to the best of her ability because of obstacles brought on by the low temperatures.

“It was harder to hit shots,” Hadden said. “Whenever it’s cold outside the ball doesn’t go as far so, you have to adjust.”

Although the weather was damp and unfavorable, freshman Caroline Lawson reflected on the whole season and appreciated how she and the other girls have created friendships with each other.

“The team has really become a big family. Especially since half the varsity team is freshmen, it’s kind of interesting to see how we all interact with each other,” Caroline said.

Freshman Ava Van Inwegen also believes the relationships within the team has strengthened thanks to Hadden and Sarah having a significant impact on how the girls have bonded and improved their game throughout the season.

“We’ve learned a lot from the upperclassmen and they’ve taught us a lot about how to play the game and get better,” Inwegen said.

To Sarah, the highlight of the tournament was when she went to the playoffs to compete for third place. Due to regulations, regionals cannot end in a tie and players must complete another set of holes to determine individual rankings.

“The playoffs were my favorite part of [regionals] because I was calm and collected while playing, ” Sarah said. “It’s the most level-headed I’ve ever been in a tournament.”

At the end of the playoffs, Lawson was awarded fourth place with a score of 41

After breaking 40, Hadden feels optimistic about next week’s state tournament and believes the team will be able to achieve a higher ranking.

“I’ve been struggling a lot lately at practices and the last few tournaments, so [getting first place at regionals] is a big confidence booster for state,” Hadden said. “[But] as a team, I believe we have the potential to get into the top five or six.”

The girls golf team will play in the state tournament at the Emporia Municipal Golf Course next Monday, Oct. 16.