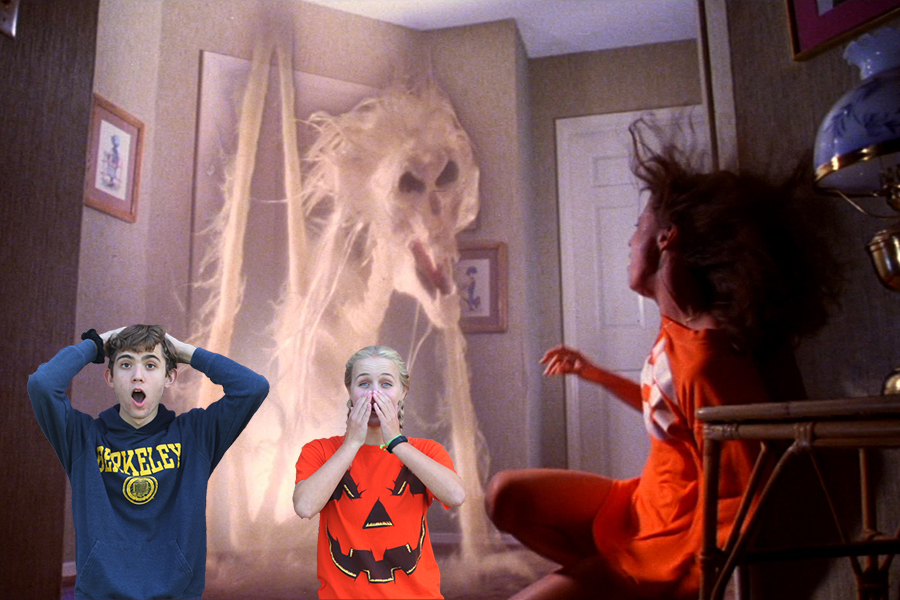 This week we watched the 1982 thriller “Poltergeist,” written by Steven Spielberg. The film features the Freeling family in California as they attempt to rescue their daughter from a mysterious supernatural force.

Molly Smith: Flash back to 2012, a living image of the leading child, Carol Ann, looks up at the television screen with her similar blue eyes and bangin’ blonde hair. Her mother, a movie fanatic, decided the first horror movie that her two children (ages 10 and 12) should indeed be “Poltergeist.”  Midway through the movie the young girl has decided she was thoroughly frightened. There is no surprise that this child was me. In my second viewing of this film, now seeing several horror films that have thoroughly rattled my bones, there was minimal fright factor built into this movie. Now that I have matured, the golden age classics of the 80’s no longer seem to spike my adrenaline, but, this film will always have a special place in my heart.

Ben Wieland: There are moments where “Poltergeist” does a good job of providing effective scares, especially near the end of the film. However, these moments are few and far between; most of the film’s scares are reliant on outdated special effects that make you laugh rather than scream. Scares like an obviously fake floating skull popping out of a doorway may have been effective in 1982 when “Poltergeist” was released (the film won a BAFTA Award for best special visual effects), but by today’s standards they don’t carry the same emotional weight. The few moments of actual horror, most of which come in the clown scene at the beginning of the third act, aren’t nearly enough to outweigh the numerous ineffective scares that compose most of the first and second acts of the film.

MS: In this type of horror movie, the collective body of the suburban family is targeted in order to make the movie scarier. This theme of a normal family in a normal neighborhood, with a normal life being normal, is often carried throughout many horror movies of the past and present. In the suburban themed movie, it is common for something supernatural to happen to one of the family members putting them in grave danger, an idea stretched to the limit in this genre of film. Besides the overused plot, the story line was carried well throughout the movie, creating easily identifiable aspects for viewers to find. As a member of the suburban society, writers who bow down to the rhetorical triangle would like to think that this movie would really get to me. They are wrong. The storyline, while interesting, relies too much on the rolling plot to move the story along.

BW: The cohesiveness of the story in “Poltergeist” is the most interesting part of the film. Plot points mentioned in the beginning of the film all tie together nicely at the end — specifically, early mentions of a swimming pool, a new housing development and the Freeling father’s job as a real estate salesman all return in the third act as major parts of the story. The basic storyline, a child being kidnapped by an evil spirit into an ethereal dimension while the child’s family battles to save them, has since become a staple of the horror genre, laying the groundwork for modern movies like “Insidious” (2011). However, the ending left me with more questions than answers about the inner workings of the ethereal realm and its cruel Beast.

MS: While the film may have been ahead of its time in editing and production, the storyline lacked a depth that is frequently present in the horror movies of the 20th century. “Poltergeist” creates a plot that is trapping for the viewers imaginations to create a deeper meaning for themselves. On the contrary, the film is put together by artistic shots that add to the structural integrity of the movie.

BW: While the movie’s plot is very neatly tied together, it is exceptionally shallow. The movie’s theme of family isn’t pursued in a unique way, and the film offers very little social commentary outside of a very basic critique of a greedy capitalist real estate developer. As always for a film directed and produced by Spielberg, “Poltergeist” is generally well produced and shot. Spielberg does an excellent job of using long takes to build tension, especially in the film’s very first scene. However, you can’t put lipstick on a pig — or, in this case, a film with no creative messages or themes.

MS: Looking at the faces of our viewing party, the first 30 minutes didn’t seem to be very enticing. I had a decent time since I was identifying the plot points freshly established in the beginning of the movie, which is an activity of only a second time viewer.  Besides the beginning lacking fun for the audience, I found the overall set up to be successful in creating an outrageous ending.

BW: I was a bit bored during the first act, but that’s pretty normal during horror films. From the moment the first spirits escape the television, the movie moves at a breakneck pace that kept me entertained. When the scares fell flat, I was usually too busy laughing at the absurd CGI to notice.

MS: To conclude, “Poltergeist” lays out a sufficient plot to establish slight aspects of horror throughout different parts of the movie. I felt in seeing the movie a second time, I was still engaged in the plot. In addition I also picked up on more plot points but the horror aspect affected me less and I was more uncomfortable than scared.

BW: “Poltergeist” suffers from a lack of depth to its themes and clearly outdated CGI, but it did its job as a thriller and kept me entertained the whole time while also featuring a somewhat complex story.

Have a fearful Friday!