Freshmen react to their unusual first year of high school

As the school year nears the end of its course, freshmen reflect upon their stagnant first year of high school 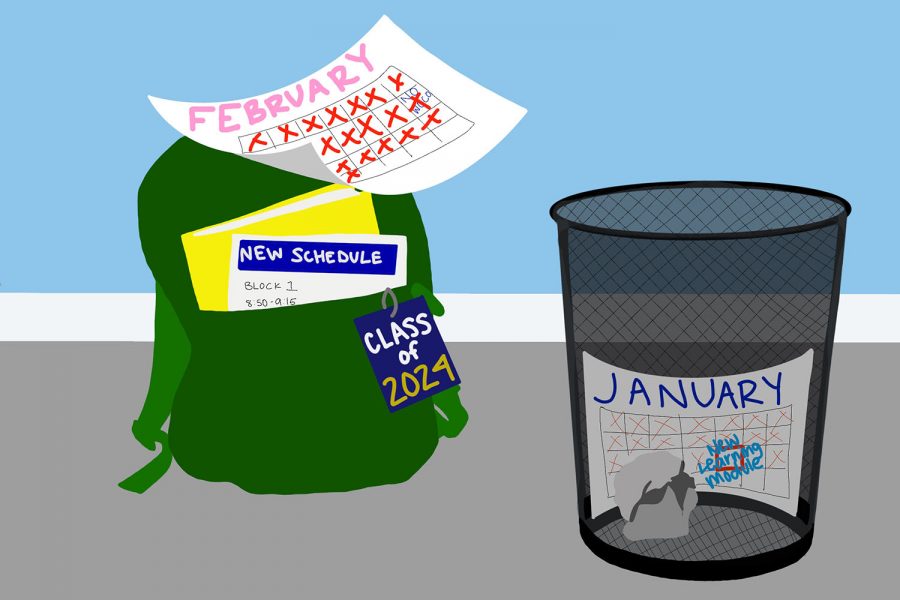 As the school year nears the end of its course, freshmen reflect upon their stagnant first year of high school

Freshmen are reflecting upon their unusual introductory year of high school as the school year hits the homestretch. Missing out on several traditional high school experiences, the school’s newcomers cerebrate on how they’ve managed to cope through a chaotic and confusing year.

The consistent inconsistency of learning models, daily schedules, and allotted seminar time has made this year complex for freshman Aiden Ferguson.

“It’s honestly more difficult than what I was expecting because everybody doesn’t know what’s happening. But after the third quarter it’s slowly gotten better,” Ferguson said.  “We’re finally settling down, everybody’s finally getting into a good groove about what’s happening.It’s been a real trial and error type of year so far.”

Likewise, the absence of school dances, homecoming parades and packed football stadiums has contributed to the loss of normalcy for freshman Chaley Spaulding’s first year of high school.

“Not getting to go to football games and dances and do all of that was kind of a bummer because that’s what you want to experience in high school, but besides missing out on that [freshmen year] has been pretty good,” Spaulding said. “I just wanted to have a normal high school experience because during the first half of the year not everybody was at school at the same time.”

Unlike Ferguson and Spaulding’s experiences, remote student freshman Ella Bowling started her first day of high school from her home.

“I’m remote right now and so are two of my other friends, but a lot of my friends are in-person right now. Right now, soccer tryouts are going on so that gives me more stuff to do and it’s been fun so far,” Bowling said. “Come sophomore year, I hope that I get to see all of my friends at school and I hope that everything is mostly back to normal and we can do all the stuff that I would have liked to do in a normal year.”

While the pandemic has taken away lots of first experiences, involvement in extracurriculars has shifted Ferguson’s year somewhat back onto the path of normalcy.

“The best thing that’s happened to me this year has to be performing in the musical [“Pirates of Penzance”],” ,” Ferguson said. “It really let me see the bounds of the pandemic and what COVID-19 has taken away from us as well as let me meet new people and socialize during a time where nobody really talks to each other. The musical really helped me socialize and it made me feel like this year was a lot better than how it started out.”

Despite feeling slightly cheated out of having a normal first year of high school, Bowling chooses to focus on the high points she was able to achieve throughout the year.

“My freshman year is definitely not what I expected it to be, but it’s been easier than what I thought it would be like without a pandemic going on,” Bowling said. “Everyone’s really nice, all the teachers are really helpful and encouraging so my freshman year hasn’t been too bad.”

Spaulding looks enthusiastically toward her sophomore year with the hope that she will get to celebrate the events she missed out on over the fall and winter of this year.

“I’m hoping the school has a homecoming parade next year and that everything works out in terms of hosting sports games and dances,” Spaulding said. “I’m also looking forward to experiencing the little things like eating a normal lunch with the tables put together. I’m just excited to experience a more regular year even though it might not be completely normal.”