Jaguars compete in meet at Olathe Northwest on Saturday, March 3 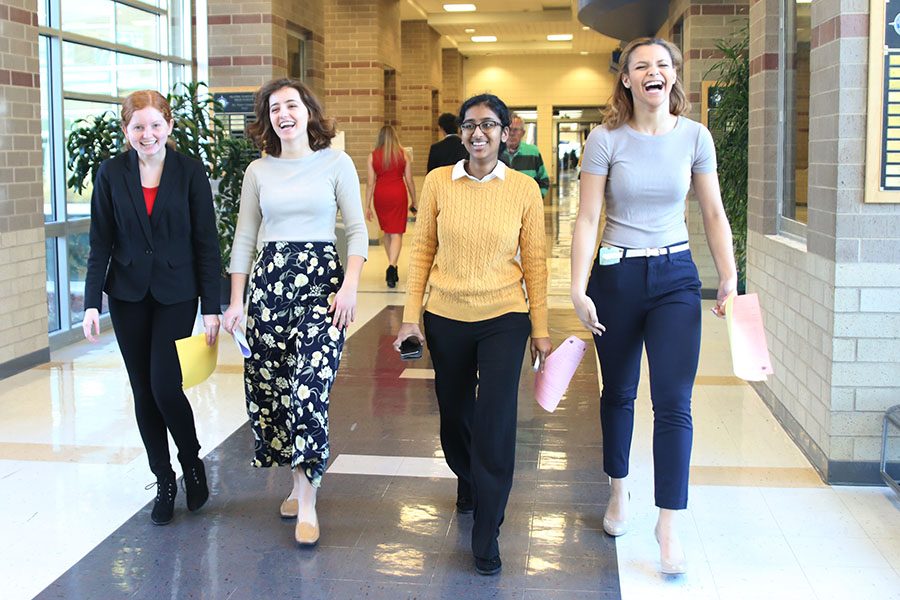 Juniors Grace Johnson, Lauren Rothgeb, Elizabeth Joseph and Lucy Graff make their way to the rooms where they will compete on Saturday, Mar. 3.

Students participating in forensics travelled to Olathe Northwest on Saturday, March 3. While they did not place as a team, several members ranked individually. Junior Lauren Rothgeb finished sixth in dramatic interpretation and juniors Elizabeth Joseph and Lucy Graff made it to semifinals as a duet.

Rothgeb believes that forensics is unique in comparison to other activities and feels like it is an academically rewarding experience.

“Forensics is sort of like the track of the speech world,” Rothgeb said. “There are multiple different events that you can do that are either more like acting or more similar to a debate style.”

While some returning team members have become used to the rigorous work and wide selection of events, first-timers like senior Jayden Moore felt less confident going into the meet and worried about their performances.

“This is my first year and first meet in forensics and I’ve learned that impromptu is a lot harder than I thought it would be,” Moore said. “I didn’t know very much information about the topic I was supposed to talk about and it got a little stressful.”

Several students competed in solo competitions, but Joseph and Graff had the opportunity to work together as a duet. Joseph enjoyed being able to practice with another person but thinks that it added an extra pressure onto her.

“Duets are kind of interesting because it requires you to rely so heavily on another person,” Joseph said. “You want to reach the same level as your partner and become equal performers, which can be difficult because when you’re by yourself, you’re the one who sets your own standards.”

Sophomore Park Zebley put a lot of effort into preparing for the meet and said that it all paid off in the end.

“It’s a lot of memorization and hard work,” Zebley said. “So, I love the feeling I get after totally killing a round.”