Eight students placed in the online tournament held March 19 and 20, and two qualified for the State Championship and State Speech Festival 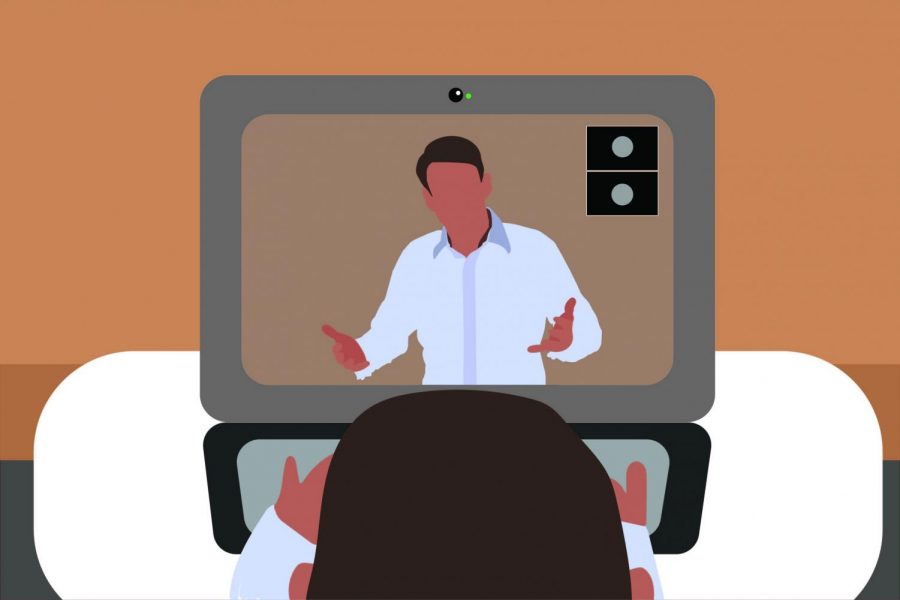 The forensics team competed virtually at the the Shawnee Mission South tournament March 19 and 20.

The forensics team had a successful showing at Shawnee Mission South’s online tournament March 19 and 20, with eight students placing in one or more of their events and two students qualifying for the state-level Championship and Speech Festival.

Placing first in Impromptu and International Extemporaneous Speaking, senior Adam White qualified for the State Championship in both events, in addition to placing fourth in Congressional Debate. Qualifying for the Speech Festival, senior Patty McClain placed fourth in Informative Speaking.

Freshmen Grace Cormany and Ashley Makalous were both top performers in Program of Oral Interpretation, placing first and sixth respectively.

According to Cormany, Program of Oral Interpretation is an acting event where students read and perform from a script, or “program,” made up of “thematically-linked pieces of literature,” such as prose, poetry or drama scripts.

“When [the performer] turns each page, it symbolizes that they are moving on to another piece of literature,” Cormany explains. “This allows the performer to convey an important message through multiple stories, rather than just one, which is why the event initially stood out to me. Since then, I have grown to love the event and beauty within it.”

Forensics is far more than a competition for Cormany (who has already qualified for the State Championship and Speech Festival). She views the Program of Oral Interpretation event as a “prodigious opportunity” to spread awareness through her program, which “touches on stories of those affected by domestic violence.”

“This is a topic especially relevant in the status quo since domestic violence has increased 20% over the past year due to COVID-induced lockdowns,” Cormany said. “It is incredibly important that people hear their stories, as their voices are so often silenced.”

McClain, qualified to attend the State Speech Festival for her informative speech, likewise uses her event to shed light on topics that often go overlooked.

“My speech is about shoulders and how they are used symbolically in a lot of different ways,” McClain said. “I like to choose topics that seem completely pedestrian but have a lot of deeper meaning behind them. For example, shoulders have been used to symbolically represent strength and resilience, but we aren’t acutely aware of this day in and day out.”

McClain and Cormany may have the opportunity to reach thousands via their performances if they make it to national competition, a goal shared by forensics coach Dr. Cameron Carlson who hopes to “have at least one student qualify for a national tournament.”

Sophomore Sarah Johnston, state-bound in International Extemporaneous Speaking and Impromptu, also hopes to qualify for Nationals and believes “it should be attainable” if she keeps working.

Whether she attends Nationals or not, Johnson can take great pride in her season regardless, because she recently earned the National Speech and Debate Association degree of Outstanding Distinction – an honor awarded to competitors who have earned 500 competition points in both debate and forensics combined, according to Carlson.

“Competing over Zoom has definitely been a unique experience,” Johnston said. “It is much more difficult to establish a connection with the judge, but I believe we have overcome that hurdle quite well.”

Carlson agrees that the team has excelled despite the COVID-19 circumstances and believes the team’s “strengths are multifaceted.”

“We have dedicated talent from both the junior and senior class. I’m also really impressed with the upperclassmen who have assumed leadership roles within the squad,” Carlson said. “Our underclassmen were among the first to compete…. We have a young interp/acting squad and a seasoned speaking squad. I would say we have strengths in both areas.”

For the remainder of the season, the team will continue preparing and attempting to qualify more students for the State Championship, which will be held May 1.