Overcoming their loss from the prior week, the Jaguars beat the Owls Friday, Oct. 8 after overcoming a tough loss the week before 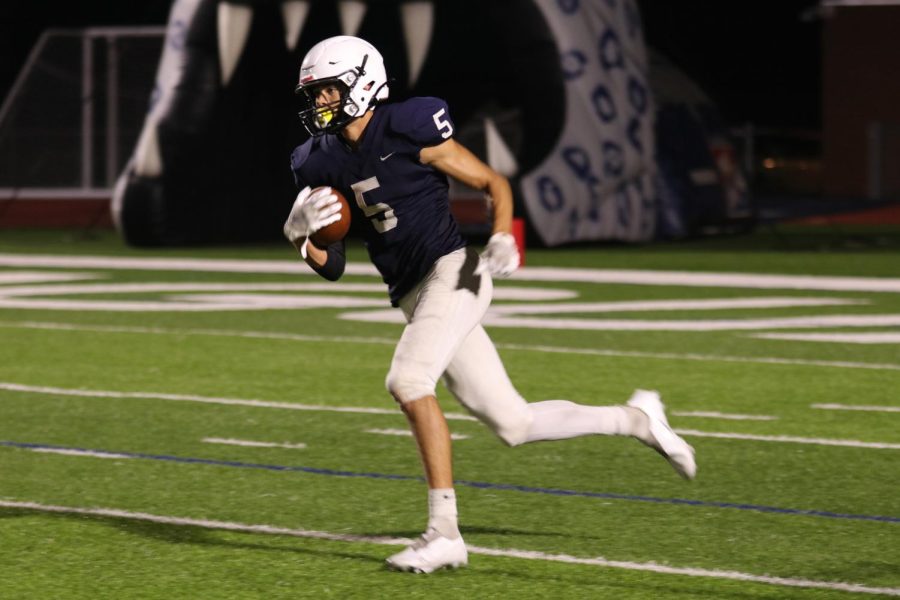 The Mill Valley Jaguar Football team took on Olathe West Owls at home Friday, Oct. 8, and came out with a victory winning 47-32 making their record 5-1. After a tough loss to Lawrence Freestate on Friday, Oct. 1, the Jaguars bounced back and took the win. The support of the massive student section and their teammates made for a fun, high-scoring game against the Owls.

Taking the state title four times in the last six years, the Jaguars are hoping for another one in the books. The players and the faculty have evidently put in immense amounts of hard work towards the football program this year, and are anticipating a successful outcome this season.

Sophomore Chaley Spaulding, who has attended the school’s football games since elementary school, has faith in the ability of the players.

“I definitely think [the Jaguars] will win state this year because we’re the best,” Spaulding said.

Sophomore Truman Griffith, who plays on the varsity defensive line, was proud of the team’s hard work against Olathe West despite the outcome of last week’s game against Lawrence Freestate.

“After coming off a loss, everyone was sold out on their preparation,” Griffith said. “Players stepped up as leaders when they needed to be.”

The school’s student section cheers the Jaguars and evidently aids in the success of the game, as the team has won all of their home games thus far. The student section always brings the hype mentality to the football field, encouraging energy among the stadium.

“I just love all the stuff that our school does when we score touchdowns,” Spaulding said. “How hype this student section gets, and how they do the lights and the announcer over the intercom and everything. It’s just a really fun experience.”

Playing at home brings a lot of energy to the field, and encourages the players to do better. Griffith explains how the student section improved the game against Olathe West.

“The student helps the team win a lot by bringing a lot of energy to the game and hyping the players up,” Griffith said.

Griffith was proud of the team for pulling through and giving students something to celebrate.

“I was proud of the team for never giving up last game,” Griffith said. “And for leaving it all on the field.”