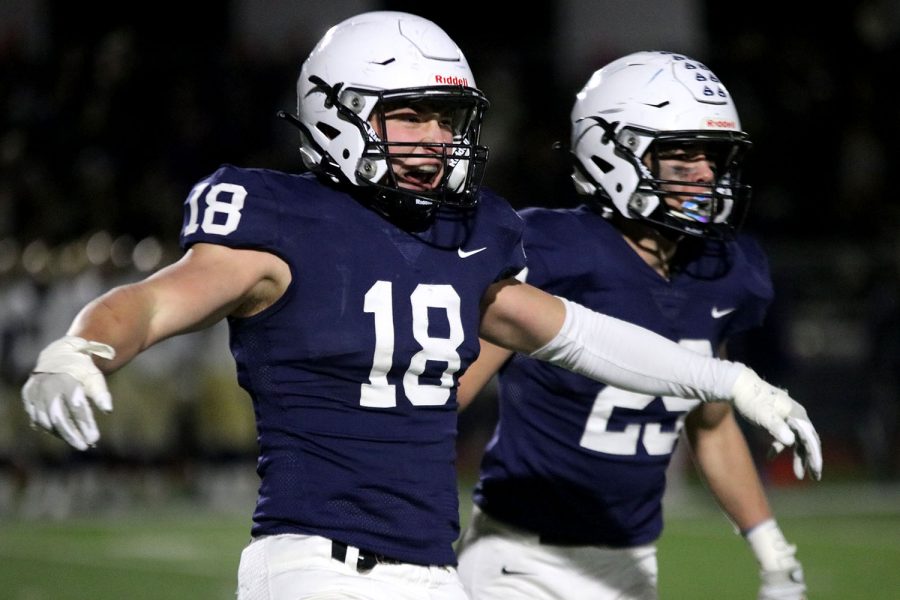 With his arms out to the side, junior linebacker Broc Worcester looks to his teammates on the sideline to celebrate his tackle Friday, Nov. 19.

Senior Adian Jacobs did not sweat the game. He felt ready and that the team had prepared the best they could.

“I was feeling prepared and positive for the game,” Jacobs said. “We had a good understanding of what our game plan was and going to be against [Aquinas].”

Preparing for the game like any other was senior Jared Napoli’s plan.

“All week we knew that we could take advantage of their secondary and those touchdowns were us doing just that,” Napoli said. “[Junior] Hayden Jay did a great job of giving me some great balls to go get, and I just took advantage of the opportunities I was given.”

Senior Cody Moore scored the first touchdown of the game during the first quarter. After forcing a fumble, he scooped up the ball and ran for the end zone. This play set the score at 7-0.

However, Aquinas had some new tricks up their sleeve, according to Napoli.

“Something that was unexpected in my eyes was how much different stuff Aquinas tried against us. They’re usually a team that doesn’t change or do anything flashy, but they pulled all their tricks out of the bag on both sides of the ball,” Napoli said. “I think that just speaks volumes to the kind of respect that other teams pay us in their preparation.”

With just minutes left in the second quarter Aquinas got their first touchdown, but still did not get in the lead, with the score at 14-13.

With just under three minutes left in the third quarter, Jacobs scored on a pass play giving Mill Valley an even farther lead of 21-13.

Looking forward to the state game, Napoli feels he has been preparing since the start of the season and has no sense of doubt for himself or the team in his mind.

“This game next week is just the culmination of everything we’ve been working for this week. This has been the goal for every guy on the team all year, to get back to state,” Napoli said. “We’re going to go into the week with all the confidence in the world, chasing another ring and doing whatever we can to get it.”