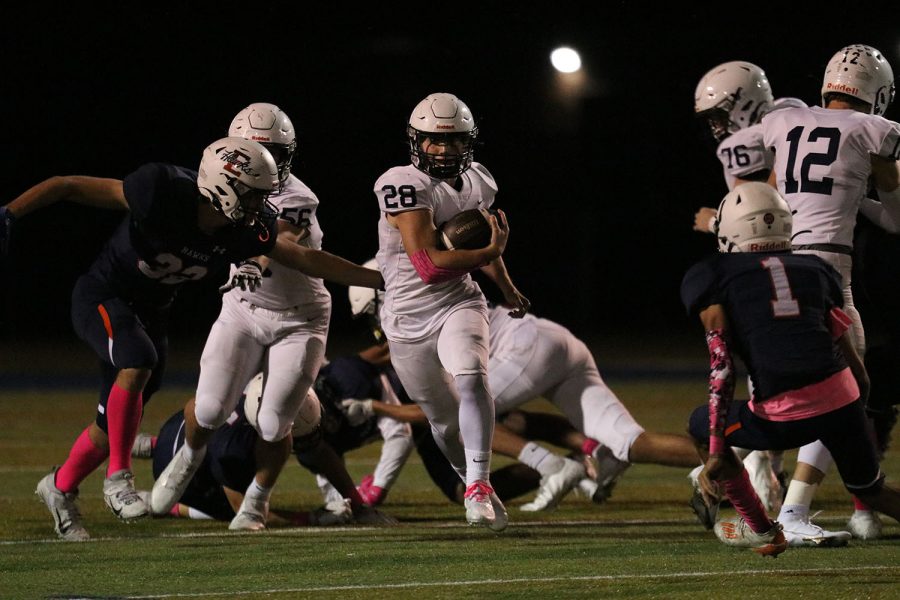 Running the ball down the middle of the field, senior running back Reice Kennedy carries the ball without being tackled.

Going into the game, Mill Valley held a record of 6-1 and Olathe East 1-6. The teams played at the College Blvd. Athletic Center.

The team wanted to stay consistent and look forward to their opponent playing their hardest according to senior Ryan Fulcher.

“We prepared the same for Olathe East as we would for any other team,” Fulcher said. “We expect every team to play their very best against us and we know our preparation is very important: knowing how to beat any team we go against.”

For the team, consistency means constant improvement according to senior Cody Moore.

“We were confident going into the game. We know that we have to take every week seriously. We continue to step up our preparations and this comes with experience,” Moore said. “We are making leaps and bounds forward which is really helping.”

Coming out of the first quarter, neither team scored. However, just 11 minutes into the second quarter, Mill Valley scored the first touchdown, making the score 7-0.

Soon after, the rain came pouring down as OE pushed through and got their first touchdown of the game, tying the teams 7-7.

When games get tied up, Moore had a  goal to keep the mood of the team light.

“We knew we had to keep the right mindset. For me, I know I have to keep my guys level-headed and not let them get down,” Moore said. “That’s when leadership becomes important for future success.”

By half time, Mill Valley continued to defend the end zone and scored another touchdown, making the score 14-7.

To stay focused on each play and the game itself, Fulcher kept his eyes on the field and ignored the score.

“We don’t try to look at the score. Every drive is just as important as any, no matter the score,” Fulcher said. “Part of playing a complete game is being successful on as many drives as possible and once we do that, our football team will be that much closer to where we want to go.”

Mill Valley scored the final touchdown of the game in the fourth quarter, ending the game beating OE 28-7.