Camps focuses on individual and team workouts to prepare players 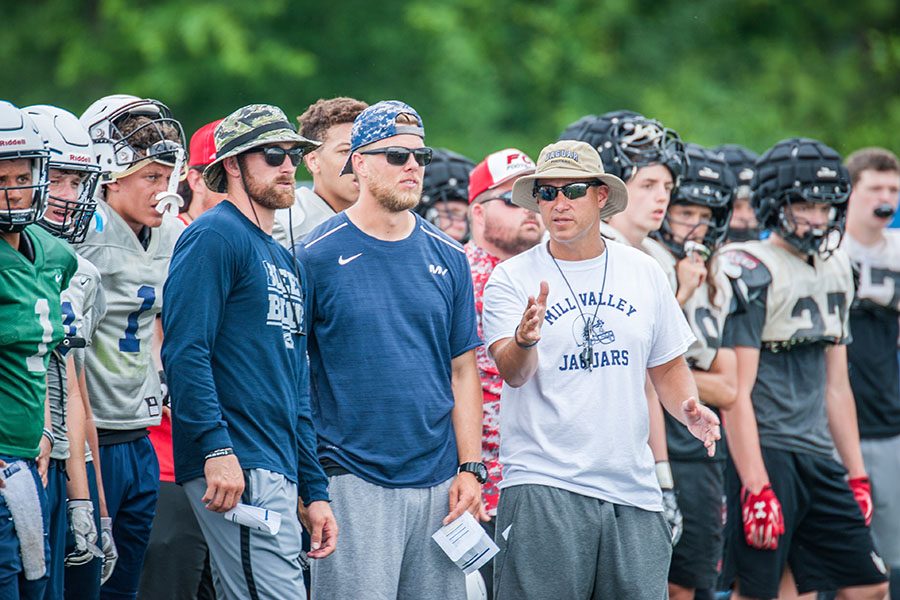 With players standing behind them, football coaches Kody Cook, Zack McFall and head coach Joel Applebee watch the football team as they participate at the Blue Springs South football camp on Thursday, June 7.

The football team improved its skills and built up its strength as a whole by attending a football training camp at the Jaguar Stadium from Monday, July 9 to Thursday, July 12.

The camp used a variety of activities to improve each individual player as well as the team as a whole, according to senior Matthew Wittenauer. The activities could be individual workouts or they could consist of small groups of players.

“We did individual skills with our position group coaches,” Wittenauer said. “For offense we worked on plays and how to up-tempo, seven-on-seven against defense and then team competitions.”

In addition to improving skills, head coach Joel Applebee thinks that having the camp annually is also beneficial for team building.

In addition to team building, the camp also provides the players with motivation from not only their teammates, but their coaches as well.

“They are always cheering you on, telling you to go,” Wittenauer said. “When they talk about the end goal, you really want to finish strong.”

Ultimately, Applebee believes the training camp was successful overall with an attendance rate of about 98 percent. He also believes it’s a chance for the players to show their dedication to the program.

“We don’t have issues with kids missing if it’s for a specific valid reason. We don’t really focus on that. To be honest with you, we just focus on the guys that are there and are wanting to get better,” Applebee said. “They work really hard. All summer long they work hard for us and do a great job.”

The first football game against Blue Valley West will be on Friday, Aug. 31 at 7 p.m.