Patrons given opportunity to share concerns with Board members 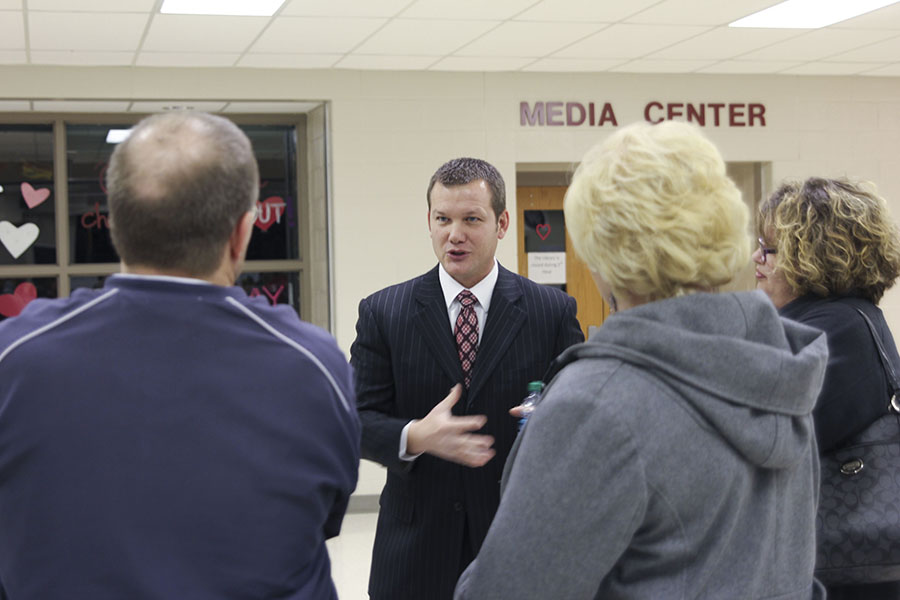 District patrons attended public forums to view the 18 proposals made by boundary committee members on Wednesday, Jan. 22 and Thursday, Jan. 23. Patrons were able to read over the specifics of each proposal and then ask questions or express concerns to committee members, district administrators or Board members.

Patron AJ Steiger wanted to share his concerns about finding a long-term solution to the overcrowding problems facing the district.

“I wanted to come here tonight because I feel it’s important that the district develops a long term strategic plan in addition to focusing on the immediate overcrowding issues,” Steiger said. “So we have to move away from short term solutions and look towards the long term.”

Freshman Kyle Kappes-Sun attended the first forum to educate himself more on the issue because it may or may not affect him in the future. In November, he wrote a letter to committee member Brian Rodkey for his English class arguing that some form of action must be taken.

“I’m interested in this because it’s going to affect what classmates I will have with me next year and continuing on after that,” Kappes-Sun said. “You can’t just do nothing for the high schools because it’s going to get really bad. It has to be both a combination of boundary changes and adding classrooms or adding on, even if it’s just temporary. You can’t just do nothing.”

Board member Mitch Powers liked that the forums let him hear new perspectives from patrons.

“I gained a lot of added perspective around what they value and added perspective on other options and ideas,” Powers said. “I have not made up my mind yet. I’m trying to take what I’ve heard the last two nights and other facts and realities and pull that all together.”

Board member Scott Hancock said the forums allowed him to understand more about how patrons established their opinions on the boundaries. He said one of their biggest concerns is whether or not they can stay in established communities.

“I gained an insight to the thought processes behind a lot of the opinions of the constituents,” Hancock said. “[The general view for most people] is that they’re part of a community, and they want to maintain their continuity. They want to remain a part of the community in which they currently reside.”