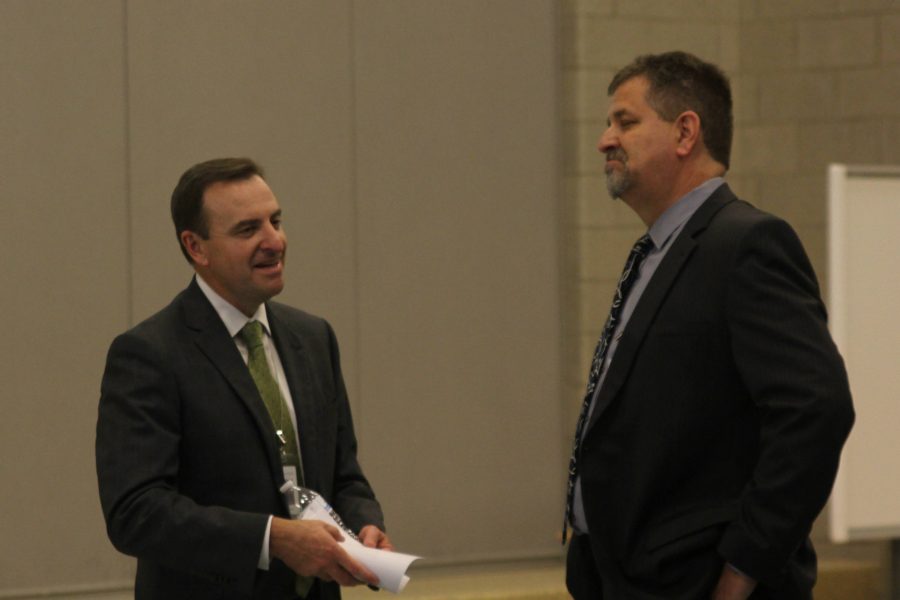 District superintendent Frank Harwood led the second of three community engagement meetings on Thursday, Oct. 6, in order to help formulate goals for the next few years.

At the beginning of the night, Harwood explained how these meetings would be used to facilitate new ideas and help provide positive change throughout the district. Harwood told the audience that they would be divided into groups where they would discuss questions proposed to them: the positives and negatives of the district, what parents expected their students to get out of attending the school and changes that could be made to improve the district as a whole.

“DeSoto is a great district, but we don’t always seem to know where we are going,” Harwood said to the audience.

After the introduction, Harwood divided the audience into two groups where they were each led by facilitators. In one group, led by Carrie Handy who is the elementary director of human resources, parents discussed the positives and negatives of the district.

“You hear of districts in the news all [of] the time with issues and problems,” said parent Amy Patrick, “you don’t hear a bunch of negative DeSoto [school] district stuff all over the news.”

The group also discussed various challenges the district faced. Parents gave examples of school boundary problems as well as the need for new technology in the schools. After that segment of the discussion, the group talked about what they expected students to receive from the school as well as various changes that could benefit the district.

Community member Eric Kremer, who has two students in the district, shared in the group how he envisions the district in the future.

“I would like to see the district move towards the 21st century deal,” Kremer said.

What Eric Kremer described is a program offered at the Olathe school district where each high school specializes in certain education programs. This system works with an open boundary system where students can choose to go to different high schools based on what they are interested in such as aerospace and engineering or life sciences.

Kremer told the discussion group how the boundaries between schools can disrupt friendships between the students.

“Both my boys went to Mill Creek, [and] half the kids go to DeSoto [while the other half] goes to Mill Valley,” said Kremer, “they should all be able to go to school together where ever.”

After the discussions, the two groups joined back up as Frank Harwood closed out the meeting. He explained to the audience how the information compiled from this meeting along with the other two would go towards a survey that would be sent out to the community.

“All this information will be available and transparent,” said Harwood, “The idea is by the end of the school year we’ll adopt a vision.”

Harwood then explained to the audience what the goal of this process was.

“We have a seventy million dollar budget, we could afford to do anything we want, but we can’t afford to do everything we want,” said Harwood, “We have to figure out what are the things that are going to make the biggest difference and set priorities and start working towards them.”

In a closing note, Harwood gave the audience one last statement.

“What do we want our image to be?” said Harwood.

The next meeting will be held on Wednesday, Oct. 12 at Lexington Trails Middle School from 6 p.m. to 7:30 p.m.