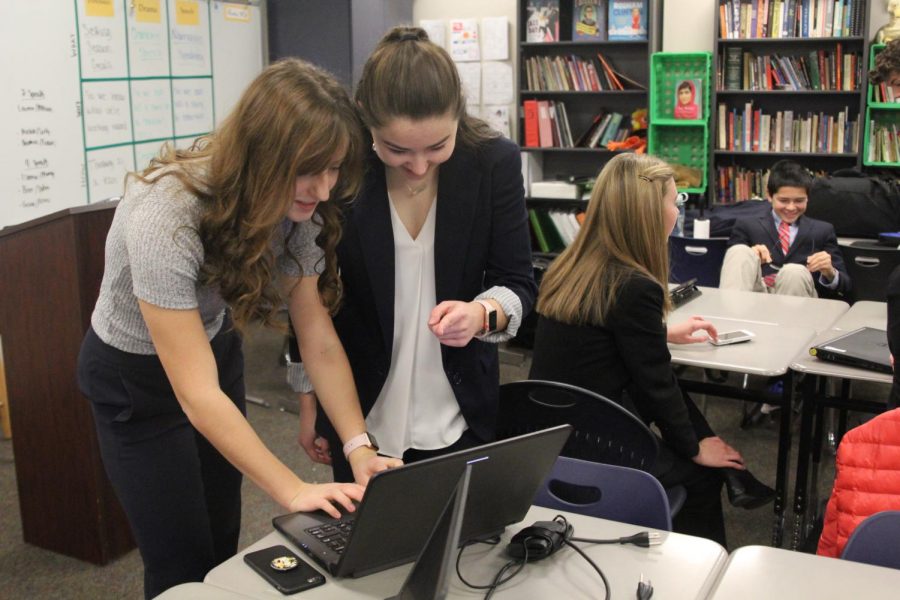 Huddled over a laptop, senior Allison Winker and junior Lauren Rothgeb prepare for the state debate competition on Friday, Jan. 12.

The debate partnership of senior Allison Winker and junior Lauren Rothgeb broke school records by placing ninth at the state competition on Saturday, Jan. 13 at Emporia High School. The duo was the first team in school history to ever make it past preliminary rounds with a record of 5-1. The team as a whole brought 12 members; three two-speaker groups and a six-member four-speaker group who placed eighth.

According to Winker, the team had low expectations for the competition due to their lack of experience at the state level.

“I had honestly no idea what to expect. No one on our team had ever been to state before, and so I tried to keep a really open mind about the whole thing,” Winker said. “We were mostly just hoping to do our best and try to have at least a 3-3 record.”

The performance of the team surpassed Winker’s expectations.

“I am so proud of everything that we accomplished because we did so much more than we ever anticipated. We didn’t ever expect to do as well as we did,” Winker said. “We really put in a lot of work and put forth our best effort and it showed in our results.”

Rothgeb feels overjoyed to have made it as far as they did at the competition.

“It was so exciting to find out Allison and I made it into out rounds,” Rothgeb said. “Being the first Mill Valley students to do that was obviously a pretty cool feeling. The best part was just the happiness that accompanied the knowledge that our hard work paid off.”

Winker attributes part of the team’s success against tough competition to their new leadership of debate teacher Ann Goodson.

“There were so many talented teams there, including people who are nationally ranked. Just getting that record and making it to out rounds was a really big achievement and I was so, so proud of us,” Winker said. “I think it’s a big reflection of the way things have changed under Goodson’s leadership and how much she pushes us to be better and do things we don’t think we’re capable of.”

For Rothgeb, the competition would not have been near as successful without the work of her partner, Winker.

“We understood each other and each of our strengths balanced the other out; it was perfect,” Rothgeb said. “I know, without a doubt, that I would not have accomplished nearly as much without her.”