While on the course at Raymore-Peculiar High School, head coach Chris McAfee cheers on the varsity boy runners on Saturday, Sept. 30.

Head cross country coach Chris McAfee stands eagerly on the sidelines at the Rim Rock Classic on Sept. 23, cheering and coaching his runners as they race past him toward the finish line. In McAfee’s first year as head coach he has applied a number of changes in the way the team practices and races. These changes have all been made in the hopes to cross the finish line first this year at the state meet in October.

As McAfee’s position on the team changed, so did his responsibilities. According to him, the amount of time and energy required as a head coach is far more than an assistant coach.

“As assistant coach, you show up and talk to kids and encourage kids and then when practice is over you get to go home,” McAfee said. “As a head coach, you have to be constantly thinking about the program … and what we could be doing differently and communication to parents and answering questions and things like that. It’s definitely more time consuming and there’s a lot more planning that goes into it.”

When the fall season began, McAfee started to make a series of changes to the practices in hopes that they would improve how the runners use the time they have. One change was to ensure each runner had the same workout, no matter whether they were C team, junior varsity or varsity.

According to junior Delaney Kemp, these changes have affected the structure and atmosphere of practices.

“There was a lot of segregation between the different teams among our big team [in years past],” Kemp said. “[Now] everyone runs the same workout but at different paces, [and] it brings everyone together because we are all doing the same workout. McAfee puts us in race situations every single day.”

Another change that McAfee made to practices is that they are designed to simulate a race like scenario. McAfee found the idea to create these race situations from a coaching camp he went to over the summer in Colorado Springs, CO. There, he had the opportunity to sit down with a coach from the U.S. Olympic team. 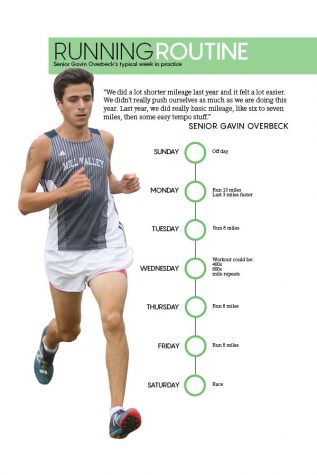 “Some of the things he was big on was trying to create race situations in practice so kids and athletes in general can practice those situations.” McAfee said. “Often times we don’t do that in cross country so we’ve tried to tweak a couple things to get those opportunities and to get into what it feels like in that mental state of hurt … so that they are better prepared to race.”

According to senior Gavin Overbeck, the changes have ultimately had a positive effect on the team.He believes the runners are more physically prepared for the season.

“I think the extra mileage will make us mentally stronger and our bodies more physically ready this year, and I think you can definitely see the difference in the results,” Overbeck said.

Looking ahead to the rest of the season, assistant coach Betsy Meeks has high expectations for the team in the postseason.

Kemp believes that the added mileage and extra tempo workouts McAfee has implemented this year will help them outrun the competition at state.

“The amount of gratitude we have for McAfee right now is going to be amplified when we come across the line with a huge trophy,” Kemp said. “It is going to all pay off.”