The girls took third and the boys took first at the meet they hosted Thursday, Oct. 8 at Shawnee Mission Park 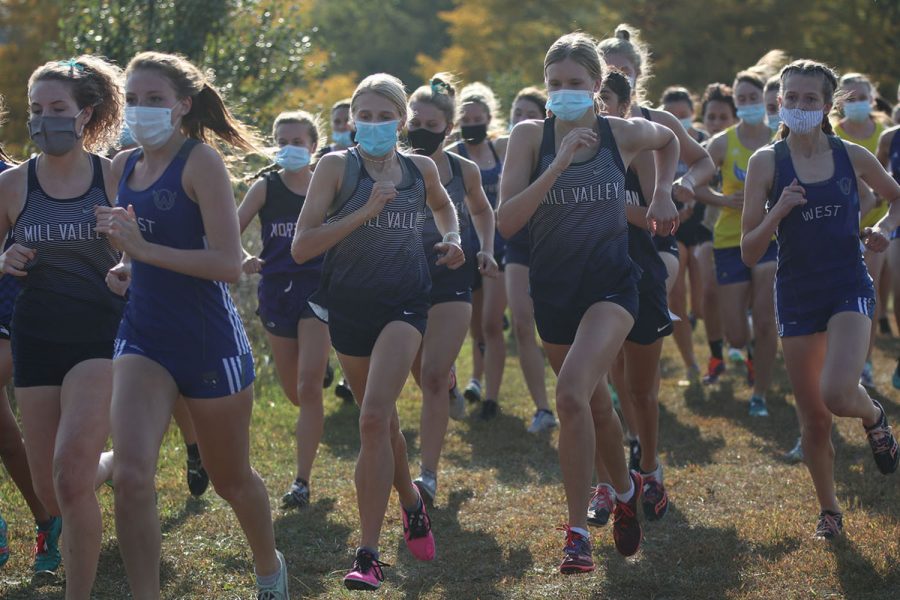 Side by side, juniors Bridget Roy and Katie Schwartzkopf begin the race with their masks on.

End-of-the-season meets give athletes the opportunity to fine-tune their strategy, form and teamwork before league, regional, and state-level competition. Hosting the Mark Chipman Cat Classic gave Mill Valley a chance to do that Thursday, Oct. 8.

The varsity boys team won the meet with their four top runners in the top 15; the girls team came in third, tying in points with Olathe West for second but getting beaten out when it came to average and total racing times.

Senior John Lehan, a varsity runner, was very pleased with the team’s performance and believes that the meet gave them the opportunity to meet their goals and show other teams what they can do.

“Our goal was to get a lot of runners into the top ten, and we had a really strong pack go out in those top ten positions,” Lehan said. “We really showed the other teams what we are capable of today and I think that sends a really strong message.”

Being able to perform at the level that the team did on Thursday, according to head coach Chris McAfee, helps the team progress, learn and improve on a mental and physical level.

“We are trying to get better every single week and I think we had a lot of good results today that helped us learn things about ourselves and bust through some mental walls that we’ve had,” McAfee said. “Overall as a group, we got better; the teams were having fun during the race and feeding off of each other’s success.”

Not only did the race allow the teams to improve physically, but the results gave many athletes the confidence that they need for the upcoming league, regional, and state competitions. That confidence, according to McAfee, will allow them to perform better on all of those levels.

“I think that at your last regular season meet, you want to do something that is positive and give you a positive feeling going into the end of the season. I think we had a couple of kids who were going to be battling their confidence going into the end of the season and I think today was good to give people some confidence going into next week,” McAfee said. “When we have that confidence, it feels like we can do anything and accomplish anything. At least we know that when we show up to the next three meets we know that we can do some pretty special stuff and that’s all that you can ask for at this point.”

The team’s success at the meet wasn’t without challenges; one of the biggest hurdles that they faced at the meet was blistering heat and one of the largest fields of competition they have been up against the entire year.

Despite the heat, which had been nearly unprecedented in this year’s cross country season, some runners were still able to set personal records at the meet.

“It is a bit early in the season, and if we were used to the heat people would have had a chance to run a personal record today, but it has been so cool recently so with this kind of heat, it makes it a lot harder to run that fast and condition yourself to do that,” McAfee said. “I think our kids did really well and we had some kids who did set personal records, which is phenomenal in this race with these conditions.”

McAfee and the team knew going into the meet that times might be slower, but their goal remained the same: to focus on placement rather than times.

“We told ourselves to not worry about our times. We all knew that we weren’t necessarily going to get personal records today so our focus became set on our positions in the race,” Lehan said. “In that regard, I think we did better than other teams because we were prepared for the heat and we had been talking about it all week.”

For the team, there was no better place than Shawnee Mission Park to fine-tune their technique and teamwork before league, regional and state competition. McAfee emphasizes that since the course was a route that they often practice and have run many times before, it made the race more comfortable and allowed them to prepare.

“I think there is always a little bit of an advantage when you have more of a comfort level where you are competing; it lets you prepare better if it’s at a place you’ve been quite a bit,” McAfee said. “We have practiced and ran here quite often but it’s not necessarily a home-field advantage, we are just a little bit more comfortable and know what to expect, which helps without a doubt.”