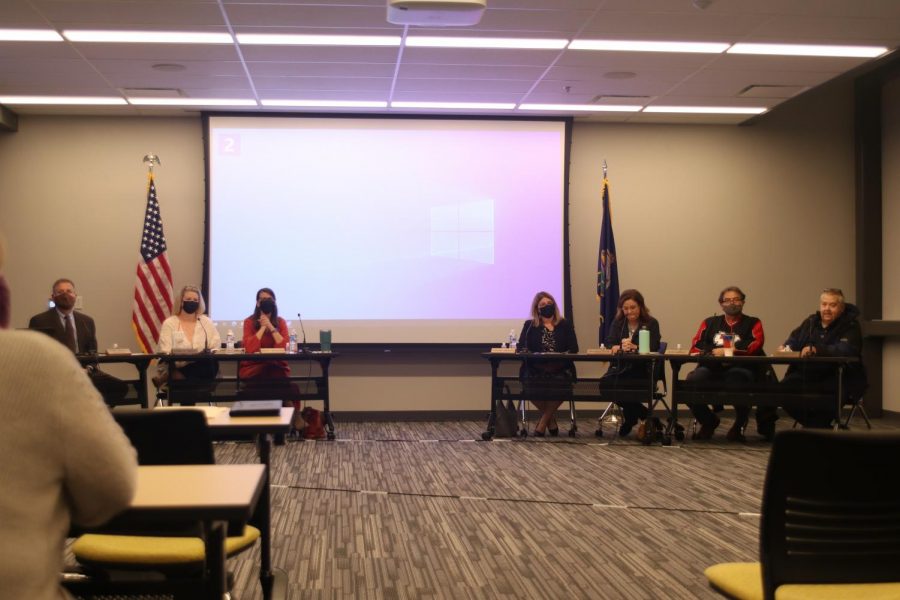 At their regularly scheduled meeting, the USD 232 school board meets at the De Soto district office to discuss agenda items on Monday, Nov. 1.

The district’s annual election of new members to the school board has received much greater attention this year than in previous years, thanks in part to the decisions the board was forced to make as it dealt with the effects of COVID on the learning process during the 2020-2021 school year. This board election, held Tuesday Nov. 2, featured two different slates of candidates with radically different platforms.

Unlike in many surrounding districts, more moderate candidates won their contests, including current board president Danielle Heikes, Calley Malloy and Brandi Jonasson respectively. Voter turnout also increased in 2021, from approximately 3,200 votes cast in the 2017 election to approximately 7,600 votes this November. Additionally, in 2021 all contests involved two candidates, in comparison to the unopposed candidacies that frequented previous elections.

Prior to the pandemic, board elections were nonpartisan; individual candidates ran with the purpose of providing a service to the local community. With the pandemic’s aftermath and the approach of this year’s election, a new group of parents emerged who wouldn’t have run for office under normal circumstances. Among those parents was position 6 candidate Emily Carpenter.

“I wouldn’t say the pandemic itself made me run for school board, but it made me start paying attention,” Carpenter said. “I started watching all the school board meetings and researching the role and responsibilities of the board. I started asking questions of the administration and the school board.”

In similar circumstance was recently elected board member Brandi Jonasson, who asked herself “If not me, who?”

“I really feel that this is where my passion is,” Brandi said. “[Serving on] the PTO at Prairie Ridge Elementary used to be my thing. After my daughter graduated fifth grade I wasn’t sure where I wanted to serve next. All I knew was that I wanted to step up my advocacy by doing something different and giving back more.”

Jonasson’s entrance into school board politics during irregular times changed the lives of her family including her son, junior Foster Jonasson.

“[During her campaign] my mom had been out of the house a lot,” Foster said. “There’s been a lot of people
at my house in the recent months and I’ve heard people around school mention it too. This is a good thing for
her because it’s what she’s passionate about and it’s what she likes to do.”

Like Foster, sophomore Ashley Makalous’ life had also been affected by her parents’ involvement with the board. Makalous’ parents, Kevin and Stephanie Makalous, have been involved with the board since 2016, giving her a different perspective.

“For my dad’s race in third grade, I brought his cards to school and handed them out to the kids in my class even though they didn’t vote,” Makalous said. “For my mom’s race, I got to do my first set of mailings and built signs and helped with as much stuff asI could.”

Re-elected board president Danielle Heikes acknowledged how there has been an increase in attention on the board, and how the debate on face masks has created a greater division amongst board and community members.

“When COVID-19 hit, there was no win-win situation any longer,” Heikes said. “As a school board member, the decisions that we’ve made have not pleased everyone. In fact it’s become more divided as time has gone on unfortunately.”

Makalous’ parents gave Ashley first-hand exposure to the new stressors that infiltrate the life of board members.

“Nothing affected me until I was in high school and now I think about the board every day,” Ashley said.

Despite the changes and challenges, Heikes doesn’t regret running for re-election this year. All of the drawbacks Heikes experienced were made easier through the relationships, partnerships and communication.

“The way that I’m able to give back to the school district that I love so much has been extremely rewarding,” Heikes said. “I hope to be able to continue in that role.”