To compensate for the loss of over 8,000 forks, district makes financial decision to buy sporks 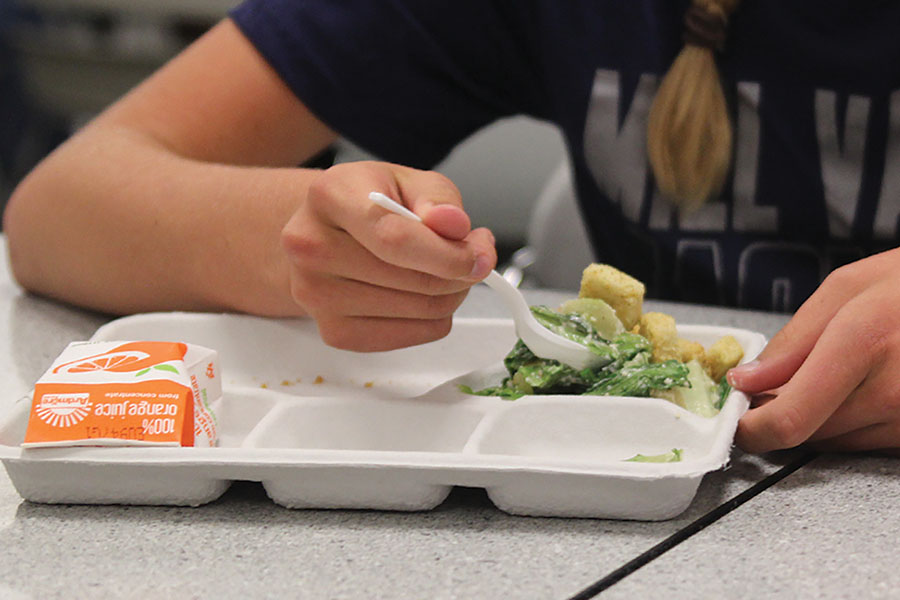 Without metal forks this year, students and staff have difficulty cutting and eating tougher foods provided with sporks.

According to kitchen manager Jean Gile, the district had to buy over 8,000 new metal forks last year to compensate for this loss, with each fork costing 9 cents. This adds up to an extra $720 spent just to keep up with depletion of forks.

So, in second semester of last year, the kitchen decided to stop buying more forks. Instead, they opted to bring out the sporks, which cost $8.18 for a case of 1,000 units.

Gile feels that forks are a privilege, not a right.

“I want everyone to have forks,” Gile said, “but I don’t want to keep buying them. I mean it’s not out of my pocket, but the school district has to keep paying for them and that’s kind of bad.” 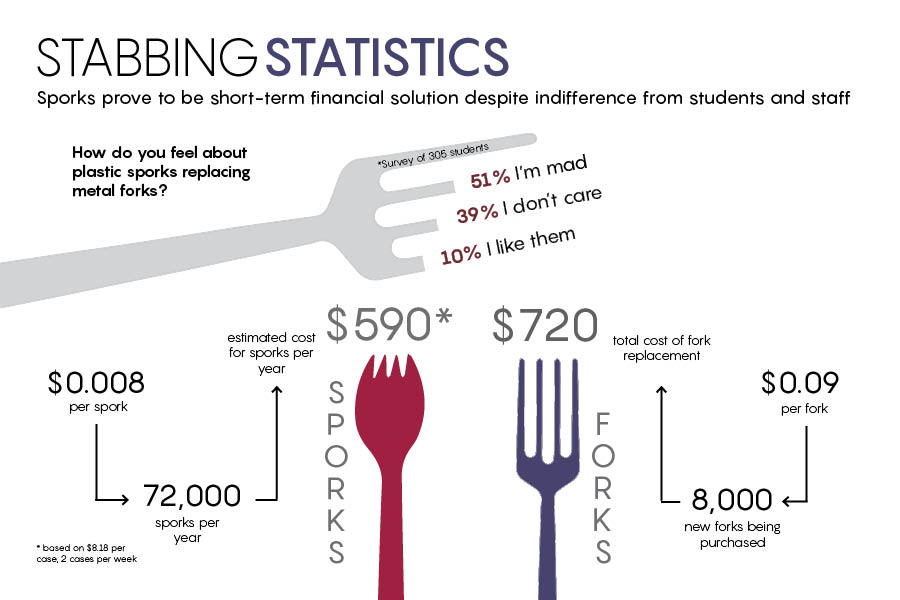 Although it makes financial sense, the decision is not happily met by students.

“I hate them so much,” junior Ana Dector said. “I feel like I can’t get the food right because it’s a spoon. Especially with salads — I can’t scoop up a salad, you know.”

Many students other than Dector are unhappy with the change. In fact, in a survey of 305 students, 51 percent said they were mad about the new sporks.

Even teachers are also feeling the pain. Science teacher Eric Thomas said that a fork and a spoon simply shouldn’t mix.

“Either be a fork or a spoon; don’t a spork,” Thomas said. “It’s terribly difficult [to eat with]. My eyesight isn’t as good as it used to be so it’s hard to harpoon pieces of lettuce with the uncommitted spork.”

While Thomas has made his opinion on the sporks clear, he ultimately understands why it’s necessary.

“You had to think, there is over 1,300 students, and if they throw away thousands of forks every week, that’s a ton of money,” Thomas said. “So, I don’t blame them. I’d make everyone use a spork too.”

Senior McKenna Harvey not only dislikes the logistics of using sporks, but worries about the environmental impact they may have.

“When you have plastic sporks, that’s so much trash every single lunch,” Harvey said. “You have four lunches every single day and the trash that’s going to amount from that is a lot more devastating than just washing a simple fork.”

Although the trash may add up, disposable forks do save water, as the dishwasher has to “run [metal forks] through the dishwasher then turn them over and run them through again,” according to Gile.

Not just the kitchen staff is benefiting from a fork-less lunch. Junior Noah Smith enjoys them, and said using them is like “killing two birds with one stone.”

“I mean it’s a lot more convenient,” Smith said. “You don’t have to go up to the main trash cans in order to just put away metal forks. You can just go to a regular trash can and throw it away.”

Gile thinks that those students that threw away the metal forks are being selfish.

Gile said that although new metal forks have been ordered, the kitchen “[thinks] we may stick with sporks for a while.”