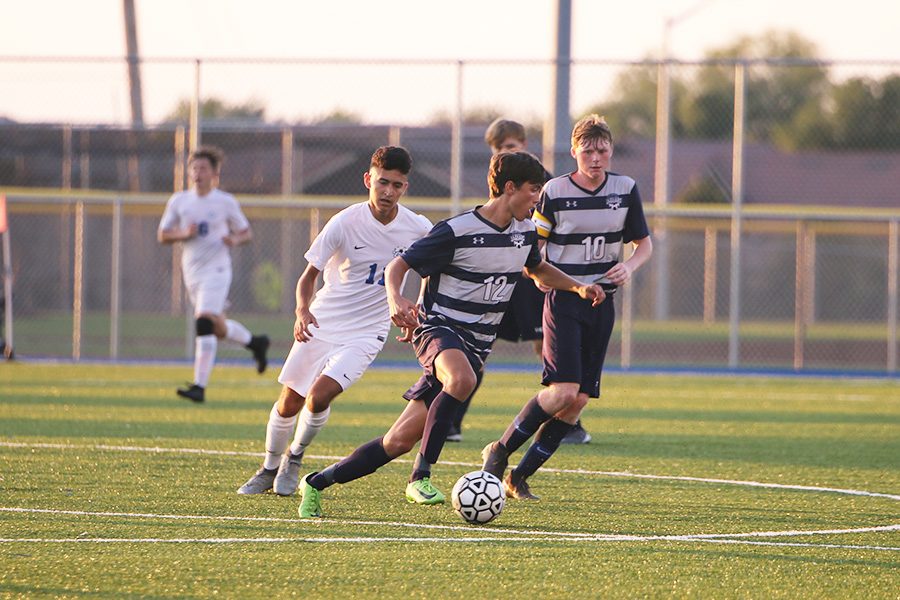 After gaining control of the ball from his opponent, senior Anthony Pentola dribbles the ball in the opposite direction during the game against Gardner on Friday, Aug. 30.

The soccer team kicked off their season with a 3-2 loss against Gardner Edgerton on Friday, Aug. 31. While the team ended up losing, they kept the game tied until going down 3-2 with four minutes left.

Senior Riley Ferguson sees a lot of promise for the team despite the first game jitters.

“Coming out for the first game we had a lot of nerves,” Ferguson said. “We have a great squad and we were able to get our footing.”

While Ferguson is excited about the team’s potential, he still feels there’s a lot that needs to be improved.

“We should improve on passing more [with] less touches,” Ferguson said. “Coming from club … we play with more touches while in high school it is much faster paced. I feel like once we get that down we can definitely improve on our game,”

Senior Will Coacher feels the team needs to do a better job communicating.

“The first half was rough, we weren’t playing as a team,” Coacher said. “The second half we connected better but still was not what we wanted,”

At the half the @MVJagSoccer are tied 1-1 with Gardner

While the game was originally supposed to be at Mill Valley, a flooded field forced the team to play at Gardner.Ferguson felt this move changed the game.

“[Gardner] is just a different atmosphere and a different speed of game,” Ferguson said. “I feel like we were able to adapt really well and give a good performance.”

With eight minutes left @MVJagSoccer is tied 2-2 with Gardner

For Coacher, the loss will be an important motivation for the team.

“[The loss] is definitely a wake up call,” Coacher said. “We thought we were better than we were going into the game and we realized we need to improve a lot.”

Ferguson is excited for the team to prove themselves as the season goes on.

“I hope that we can improve everyday and every game … [and] show people what we’ve got,” Ferguson said. “We play Aquinas and St. James coming … [and] we want to always play our best against them because they are our rivals.”

The boys soccer team plays their next game at home against Olathe North Thursday, September 5.