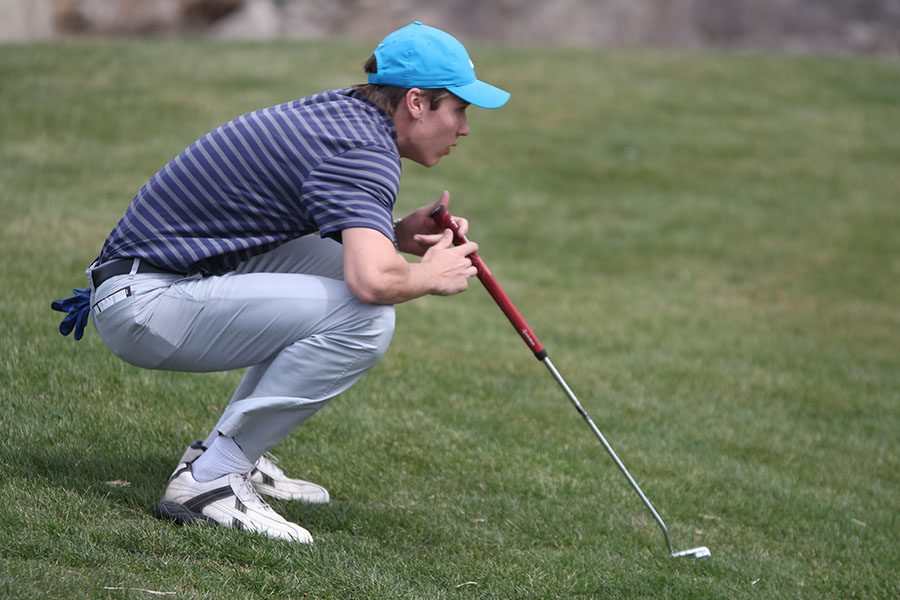 Concentrating on the ball, senior Kyle Bonnstetter lines up his putt.

With a score of 327, the boys golf team received third overall in the Prairie Highlands Invitational on Wednesday, April 11.

Junior Blake Aerni, who accumulated a total of 85, believed that problems with the course along with the wind added an extra challenge to the tournament.

Although the conditions were challenging, freshman Nick Mason, who shot 80 points, believed the team did all it could to overcome these obstacles.

“We just kind of kept on grinding through and tried to just focus on hitting each shot as best as we could,” Mason said. “There were tough conditions so third place is a good finish for the team.”

Mason has personally seen improvement in his skills throughout the season.

“I feel like my confidence has gotten better,” Mason said. “Being more confident and knowing I can shoot low scores pretty much with the other seniors and all those people who have been playing well, is pretty cool.”

This improvement has not only been seen individually but also in the scores thus received so far for the season.

“We’ve definitely improved since the last couple of years because we never have posted a score around 320 consistently, and we’ve been right around that every tournament this year,” Aerni said.

That being said, the team still has room for improvement if they are to meet their goal of eventually making state.

“We want to make it to state and if we finish in the top three in the regional then we’ll make it,” Aerni said. “if we can all get our short game better and just be more consistent then I think we’ll be set.”