On Monday May, 6 the boys golf team competed at Ironhorse Golf Club 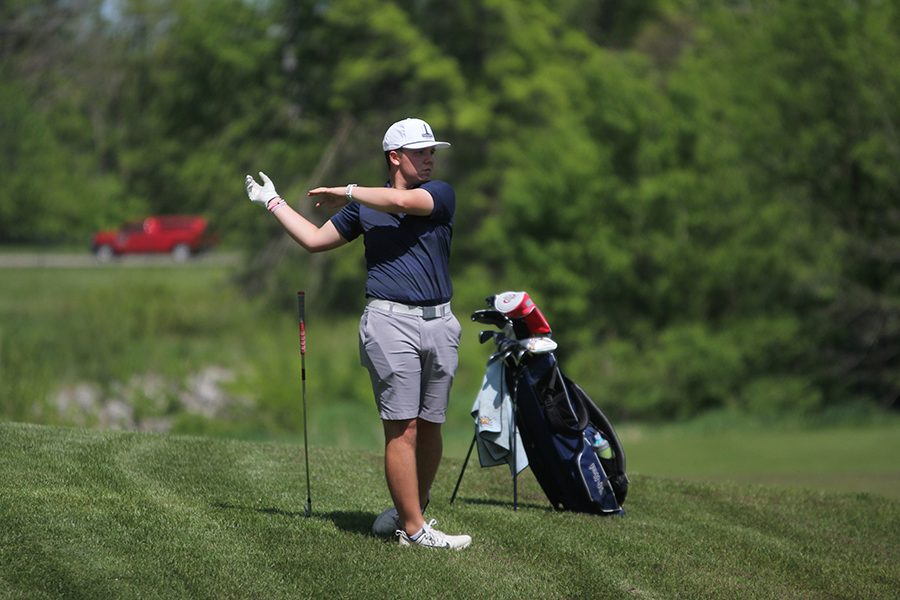 Along the green of hole 9, junior Charlie Flick watches for where his shot will land.

The boys golf team finished second at the Ironhorse Invitational, behind BVN. The team will advance to regionals and state.

“The greens were very soft, as expected, but also played very fast,” Mason said. “I had to adapt to the receptiveness of the green by flying [the ball] past the pin and spinning it back.”

According to senior Blake Aerni, he thinks his last game in the EKL went smoothly.

“I feel that I performed very well individually,” Aerni said. “I had a couple chances where I could’ve gotten strokes back, like barely missing birdie putts on holes 2 and on 18, but overall, I am very happy with the way I played.”

Lots of preparation has gone into the tournament according to Mason.

“I have played Ironhorse a lot and I knew what I would have to work on before the event,” Mason said. “I hit a lot of big breaking putts and worked on my wedges because distance control was key out there.”

Aerni believes the team has placed well this season.

“Overall, the season has been very good for the team with us playing well at many of our tournaments,” Aerni said. “We have beat a lot of the teams in 6A which is exciting because it shows that we could beat them at regionals and state as well if we show up.”

“This year has been an up and down year for me,” Mason said. “I have won twice and placed top a few times but I am super excited to head to state with the team.”

The team had to bring their A game according the Aerni as this was their last tournament before regionals.

“This tournament was different because it was the last one before regionals,” Aerni said. “It was also the last round of the EKL so it was important to perform well if we wanted to finish well in the EKL.”