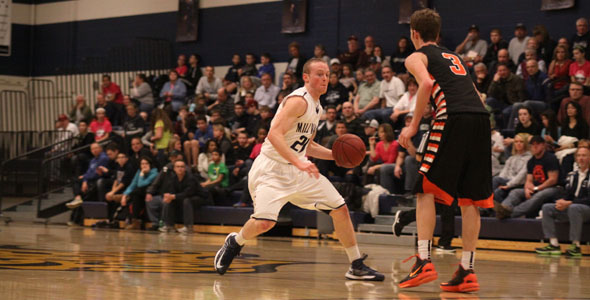 Junior Wyatt Voorhes scored the first points of the game with a three-pointer, en route to a 9-0 start. The Braves were slow to add points but were fouled and made their first point via a free throw. The first quarter ended with a score of 17-8, Jaguars.

Voorhes said that this game had one of the most explosive first quarters he has ever seen.

“We’ve been having great practices lately, and we were really pumped for this game,” Voorhes said. “We just came out with more intensity than they did, which helped us bury them early.”

Junior Drew Boatwright was the breakout star of the night and contributed 18 points to the game, 12 of which were four three-pointers in a row during the third quarter. The third quarter ended with a score of 66-32, Jaguars.

The Braves added another nine points in the fourth quarter and the game ended with a final score of 71-41.

The Jaguars next game is at home against Lansing High School on Friday, Feb. 15 at 7 p.m.