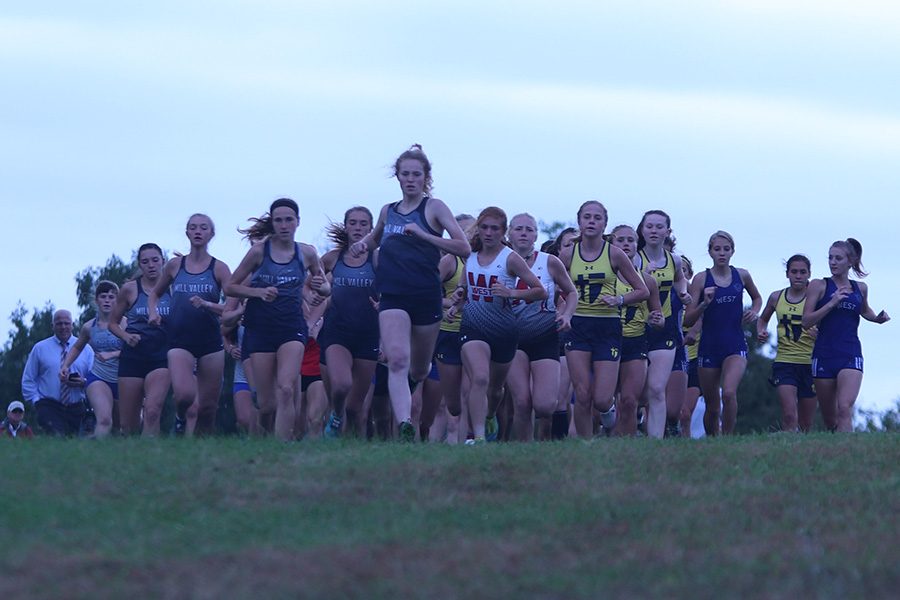 With a great start, junior Molly Ricker gets ahead of everyone and sets the pace for the race. The meet was held in Shawnee Mission Park Thursday, Oct. 10 with both the boys and girls getting first in their meets, and the girls also getting a perfect score.

The cross country team competed against 11 other teams in the Mill Valley Cat Classic on Thursday, Oct. 10. Both the girls and boys varsity teams took first place in their races. The girls JV team won first place as well and boys JV took fourth.

Sophomore Summer Anderson, who recently injured her foot, went into this meet with an apprehensive mindset and was hoping to do her best by finishing the race.

“I was really nervous, so I just wanted to be able to finish,” Anderson said.

Anderson also believes that she was able to gain more confidence in herself and her running abilities from this race.

“This meet gave me confidence for future races,” Anderson said.

Going into this race, sophomore Amy Hill was wanting to gain new experience that she would be able to use in the future.

“I was hoping to be able to learn new skills,” Hill said.

Cross Country competes next in the EKL championships on Thursday, Oct. 17 as their final meet before regionals.