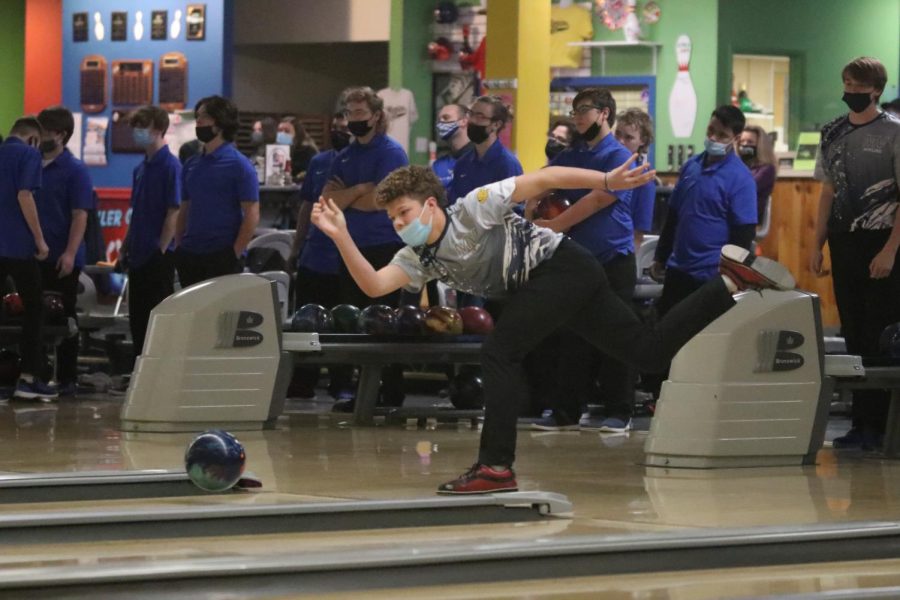 With his foot in the air, sophomore Austin Leiker rolls the ball toward the pins.

The bowling team competed against Shawnee Mission East and Leavenworth at Mission Bowl, Thursday, Jan. 20. Junior T.J. Cathey bowled a 288 to set the boys high game record, which was previously 287.

Senior Laird Toland reflects on the team’s performance during this meet.

“I think the Varsity boys placed second. We definitely have improvements to make,” Toland said. “Although, I think JV did really well, including Cathey breaking a school record.”

Cathey shares his thoughts while he was competing in front of his teammates and the audience.

“I was nervous but had to stay calm and bowl like I would at practice,” Cathey said. “I had a lot of people watching me so it made me want to beat the school record even more.”

Toland then described what he thinks the team needs to work on to gain success throughout the remainder of the season.

“I think the team could get better at adjusting to the lanes,” Toland said. “We tend to struggle on lanes we aren’t comfortable with.”

Additionally, Cathey explains the new goal he has set for himself throughout the remainder of the season.

“I was very surprised and excited when I beat the record because that was my highest game,” Cathey said. “I now have a goal to get 300 before the season is over.”

Toland shares what he will miss most about the team next year.

“I am definitely going to miss the team aspect,” Toland said. “Having all these guys around while bowling makes it 10 times more fun. It’s going to be hard leaving them next year.”