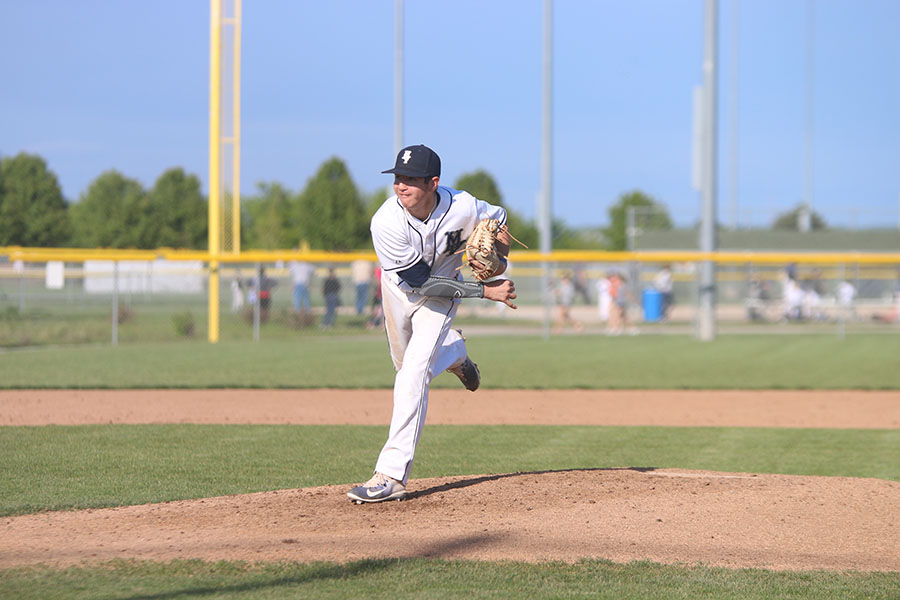 The baseball team defeated St. James 8-1 in a home game on Tuesday, May 2.

Throughout the game, several individual players made great plays, according to sophomore catcher Ethan Judd. Judd believes that his team played good defense and kept the energy level up the whole game, which, to him, are all keys to being successful.

Before the game, head coach Jeff Strickland had confidence in his team.

“If we take care of the baseball and throw strikes we should be fine,” Strickland said. “It’s the same mindset we always have.”

Coming into the game, senior left fielder Luke Sosaya believed the team’s defense would help them throughout the game.

“We knew that St. James was a good team, but I was confident because I knew [senior pitcher] Jack Blancarte would throw strikes and I knew we would play good defense,” Sosaya said.

During the game, Sosaya hit two home runs; these hits helped to boost the team’s momentum and spirit, according to Sosaya.

“Everyone was up in the dugout cheering everyone on, and that really helped keep the energy level high,” Sosaya said.

Strickland was proud of Sosaya when all of his hard work payed off.

“I was very happy for [Sosaya], he works very hard and he deserves moments like that, especially after hitting two home runs,” Strickland said.

The win was a good way to bounce back from a tough loss, according to Sosaya.

“It was a great team win after a loss to BVSW and I think it will give us momentum heading into the final five games and postseason play,” Sosaya said.

Going into the final stretch of the season, Sosaya wants to keep practicing and playing the same as they have all year.

“We are just trying to keep the same mindset that we have had all year and keep playing the same baseball we have played throughout the season,” Sosaya said.

The team’s next game is in the Emporia tournament at Soden’s Grove Field on Friday, May 5.