Band students join outside groups to develop as musicians 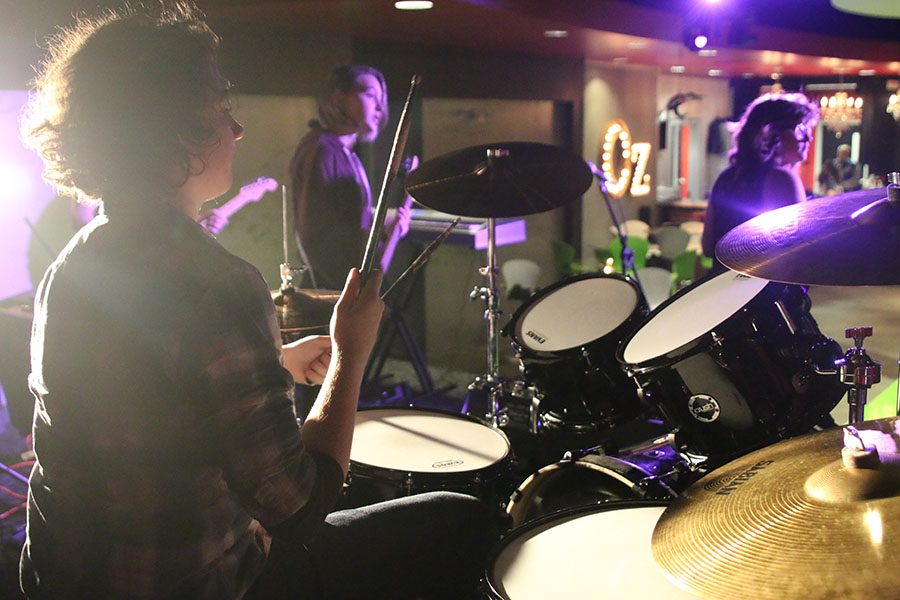 While rehearsing on Monday, Dec. 4, sophomore Cael Duffin plays the drums with his class from School of Rock. “It’s the interconnectedness that School of Rock has that makes it less of a band and more of a family,” Duffin said.

When sophomore Cael Duffin strikes his drumstick against the drumhead on Saturday, Dec. 2, everyone gazes his way. However, he’s not surrounded by his usual Blue 1 class, but rather his peers in his educational band in Overland Park. Other students who are in outside bands can relate to this as well, whether the bands were audition-based or not.

Duffin has been playing the drums since he was 10 years old. On top of playing in percussion in Blue band, he’s also played the drum set in School of Rock, an educational program in Overland Park dedicated to teaching students about rock and roll music and giving lessons, for six years. Duffin first got interested in the drums through his family and was enthusiastic about its role in his life.

“My mom kind of looked around because she knew I wanted to start lessons for a musical instrument, and I knew I wanted to do drums,” Duffin said. “She said to me, ‘Hey, [School of Rock is] giving out trial lessons. You just wanna check it out?’ and I was like, ‘Sure.’ … [I] did the trial lesson, and it was just amazing how cool it was and how much it was connected within this inner circle that were my age or older who just wanted to have fun and play rock music as well.”

Because of its nature and advanced material, sophomore Sam Greenup took the opportunity to play the trumpet in the John Philip Sousa Honor Junior Band. According to the band’s website, it’s an audition-based band committed to provide student musicians the opportunity to not only perform in an honors band, but also give students a chance to work with other talented musicians throughout the state.

“[I liked] the experience [of] getting to play with people you don’t know,” Greenup said. “You get to be a part of a better band than you are with the school band.”

As a part of the Kansas Bandmasters Association, freshman Jason Kingsbury plays trumpet in the Middle Level Honor Band. A benefit of being in an outside band, according to Kingsbury, is the opportunity to grow as a musician. 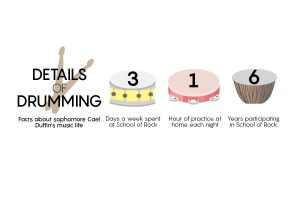 “It’s … fun to meet other trumpet players from around the county and just kind of develop my musical talent because the music is a little bit harder than what you would normally find in school,” Kingsbury said. “I may meet someone that becomes a friend; I don’t know. It’s a whole new experience.”

According to Duffin, there’s an overlap in music in both bands.

“There’s times we would do pep band music in drum line where I’ve played those songs with School of Rock,” Duffin said. “There’s kind of a lapse there with the translation of each, but it’s kind of weird being able to only play one drum in marching band and go immediately to four or five at a time in School of Rock and playing drums there.

The time commitment, however, is large factor in every band. Duffin practices with School of Rock three days of the week and on his own for up to an hour a day. Since Greenup said he only had two chances to practice with the John Phillips band, he had “to practice a lot more outside of school.”

“[In the Middle Level Honor Band] it’s very stressful because you get six different songs and you only have about a month to practice and get them all down and you’re required to know them,” Kingsbury said. “It’s a very prestigious band.”

However crunched for time the musicians may be, Kingsbury believes being in an outside band has a serious advantage when it comes to forming relationships. 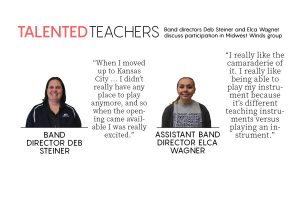 “You’re surrounded by people who care and who have a passion for the same instrument that you do,” Kingsbury said. “It’s kind of just like something to talk about. It’s a conversation starter, and it just feels better to be around people that have the same passion as you do.”

His involvement in School of Rock has left long-lasting effects on Duffin’s life, giving him and other student musicians a place to channel their creative energy.

“It’s probably one of the best decisions I have ever made in my life, which is short right now, but it’s going to be interesting in the long run,” Duffin said. “I don’t think I could ever be as happy as when I’m up there on stage with all of those people.”