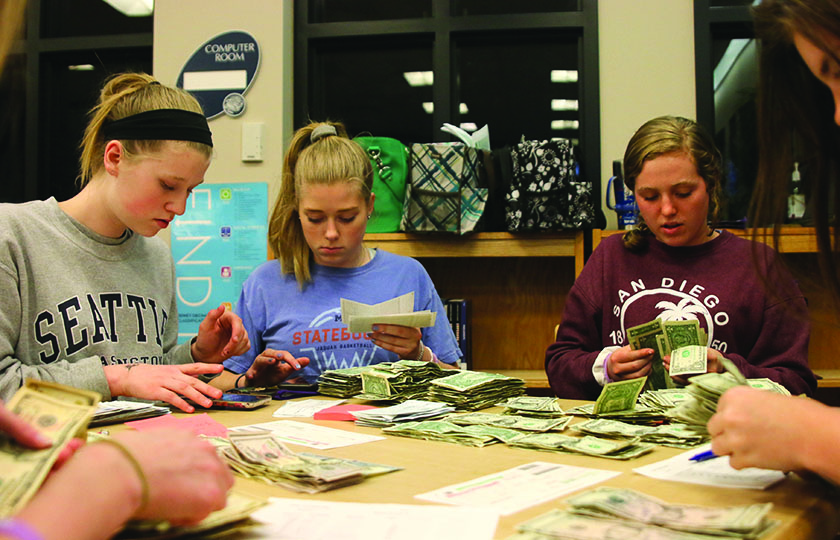 At the fourth annual Relay for Life event, over $112,000 was raised for the battle against pediatric cancer. At the end of Bank Night, approximately $90,000 was raised, breaking this year’s goal of $80,000 before the actual event took place.

Bank Night is a night where team leaders turn in all of the money each member of a team has raised. As people turn in the money, accounting committee members enter the money online and count the money.

According to senior Relay event chair Ciara Pemberton, in 2018, participants raised approximately $35,000 by the end of Bank Night. This year, Relay raised roughly $82,000 before Bank Night. 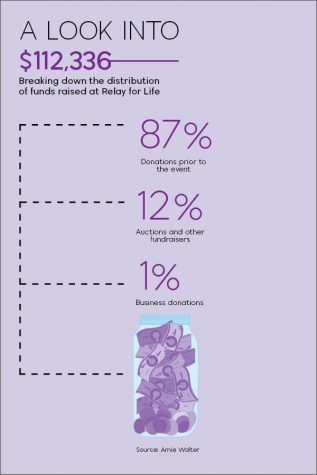 “As a school fundraiser we have multiple students in our school who either have cancer or have had cancer,” Fitterer said. “We thought that pediatric cancer would be the perfect branch [of cancer] to raise money for because of how close our school itself is to that branch.”

Senior Community Development Manager Amie Walter manages Relay for Life events in the Kansas City Metro Area for the American Cancer Society. According to senior event chair Kate Backes, after each Relay is over, Walter is also responsible for handling the money raised.

The money raised from each annual Relay for Life event does not go directly back into helping people suffering with cancer in the Kansas City Metro Area, but is rather collected for the American Cancer Society and distributed nationally, according to Walter.

“[Money raised] does not go from us to local families directly. It goes back up into a national pot that gets redistributed,” Walter said. “[When it comes to] patients, services and research funded here in the Kansas City metro area, we are not even reaching half of the money raised [from Relay] that’s reinvested in the Kansas City Community through all of our fundraising activities.”

Even though the money raised gets sent to a national pot to be later redistributed, Backes believes that the Hope Lodge will eventually receive some of the proceeds.

“…The Hope Lodge is located in downtown Kansas City and a part of the money will most likely go there,” Backes said. “This gives family members and patients a place to stay for free while going through cancer treatment.”

This year was freshman Camryn Beggs’ first time participating in Relay for Life. In 2017, she was diagnosed with Non-Hodgkin’s T-Cell Lymphoblastic Lymphoma.

Having gone through cancer herself, Beggs believes that fundraisers like Relay for Life not only benefit the cancer community, but also has a positive impact.

“Seeing people participate in fundraiser gives people diagnosed with cancer hope and brings joy to them,” freshman Camryn Beggs said. “I think that cancer patients like to not only see people just come and raise money for cancer but are also having fun while doing it.”

According to Beggs, she started her fundraising goals at $100, but after receiving countless donations, she decided to continue to raise her goal.

“I started [my individual] fundraising goal at $100 and then somebody donated $150,” Beggs said. “…I set [my donation goal] at $1,500 just because [the amount donated] kept going up and up. When I exceeded [$1,500], …I just thought that all this money is going towards pediatric cancer.”

For junior Rylee McElroy, she included a personal message of why she decided to relay this year to her Facebook friend.

“I ending up posting on Facebook and I sent out a message about my grandpa and how he had died cancer, and how I’m involved in Relay for Life at my school,” McElroy said. “I put my link on there and a lot of people who knew my grandpa ended up donating to me.”

While for junior Avery Liby, she was motivated by the new V.I.P option that the Relay committee decided to add to this year’s event.

“[I wanted] to be V.I.P because they have a lounge area and it seemed really cool, and they give you snacks and stuff so you don’t have to spend as much money on it,” Liby said. “It was pretty much are whole teams goal to be V.I.P.”

As for the committee, there were many changes incorporated to increase the amount of money Relay raised this year.

“We added Bark for Life this year which brought in over $7,000 for us,” Pemberton said. “We just added that as a team to our event. Then [the Luminaria committee] insisted that every participant bought at least one [luminaria]. We had over 800 bags of luminaria this year compared to last year, there were definitely fewer.”

According to Pemberton, in addition to the new fundraising tactics added this year, there were also mission committees sent out to inform elementary school students about Relay.

“[The committee members] explained what Relay was and they gave these kids wristbands,” Pemberton said. “If the kids showed up with their wristband tonight they could check in at the table and get a card with three free games.”

By improving every aspect of Relay this year, Pemberton believes that there was “no way we couldn’t have raise more money.”

“Blue Valley has their relay called Relay for Life of Blue Valley Youth. Just to put it into perspective, they get their five high schools to come together and raise around $150,000, while we broke $100,000,” Pemberton said. “I can only imagine what we could do if our district was big enough for us to do this times five.”