Americans, who seemingly love freedom, are willing to trade their freedom for safety and order 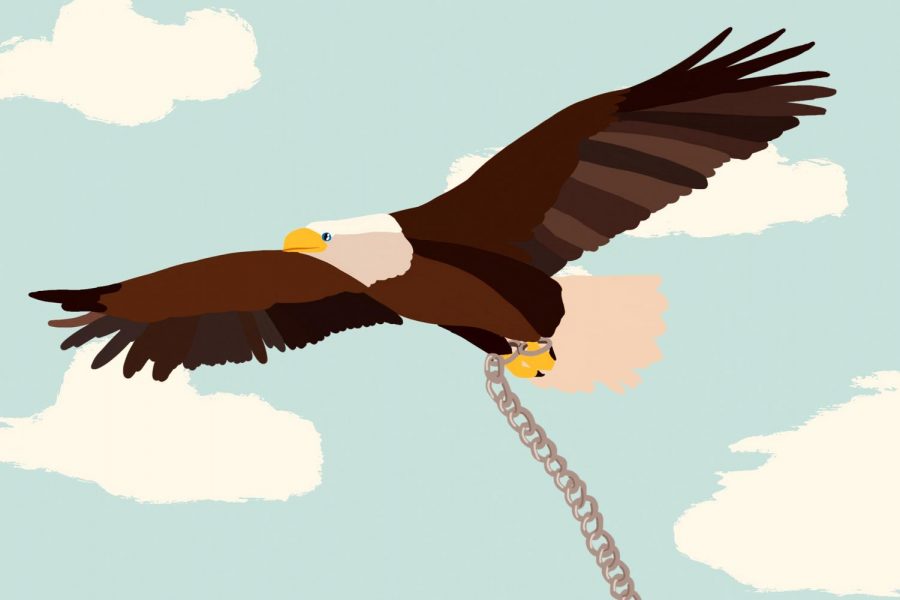 While Americans put the idea of freedom on a pedestal, they are often willing to trade their freedom for safety and order.

When you look at the Constitution, one thing should immediately pop out at you. Whether it is the liberties spelled out in the Bill of Rights or the careful delegation of powers, it is clear that Americans love freedom. Although Americans put freedom on a pedestal, American policy does not reflect the American idea of freedom. While most Americans vocally support cries for more and more freedom, the reality of the situation is that Americans have willingly given up any freedom they had to the global order in a desperate attempt to feel safe.

As best explained by James Madison, “if men were angels, no government would be necessary,” but since people are not angels they inevitably give up their rights to form a version of Locke’s social contract: a government to protect their safety at the expense of their freedoms. The whole idea of government is to protect against anarchy, which, in its simplest form, is pure freedom, at the expense of order and safety.

This role of government is further seen with modern day counter-terrorism efforts that curb the freedoms of citizens in the name of increased safety. The Transportation Security Administration (TSA)  and other similar agencies perpetuate a security theatre to “protect” people from the “threats” the government creates. While many will argue that the TSA is important for the safety of the country because it is able to stop terrorists from causing another 9/11 style attack, according to ABC, the TSA failed to find weapons in 95% of practice smuggling drills. If these measures are so ineffective, then why do we continue to allow them? The answer is perception.

Whether or not something is effective is beside the point if a government can create a threat that needs urgent action. Time and time again people are willing to give up any rights they have to feel safe. It is no wonder that people are willing to accept more authoritarian rule because charismatic leaders can rise out of fear of the “other” and “protect” their citizens. In the most extreme examples it can lead to fascist governments like in Nazi Germany when Hitler “protected” the Aryans from the Jewish people. This can even be seen in America with, according to the Atlantic, the Trump Administration’s strict enforcement of immigration policy to “protect” citizens, which justifies putting kids in cages along the border. As long as governments give their citizens an illusion of rights, they will always trade freedom for safety.

The issue of giving up freedoms goes way beyond perceived threats. The entire global neoliberal order is built around structures that actively take freedom away from the individual.

The best example of this is the set up of the school system. School is built around a rigid schedule based on repetition and order. While students undoubtedly get to choose many of the aspects of their day, they needlessly submit to a school that is designed to train them for the workforce.

This idea of preparing students for the workforce crushes their freedom to create and forces them to become cogs in the machine of the global capitalist order that forces them to trade their time for money that is necessary to survive. That underlying system kills freedom because freedom, even if it may sound clique, is not free.

Most people love to point to the American Dream and make the argument that anyone can succeed, but according to the Atlantic, teachers are pushing people into STEM and other high paying careers instead of encouraging students to follow their passion. Instead of giving people the freedom to do what they love, students, especially those of a lower socioeconomic status, are told to pursue high paying jobs because their dream is not something that is practical.

While America without a doubt provides some of the best protections of freedom in the world, that freedom does not apply to matters of security and money. That is why I find it so hypocritical to call America the “home of the free” because it doesn’t tell the whole story. Americans may claim to love freedom, but the reality is they are always willing to give that freedom up for security and routine.