America needs to abandon the values of conservatism to move forward

Conservatism is, by definition, antithetical to progressing and moving forward as a society 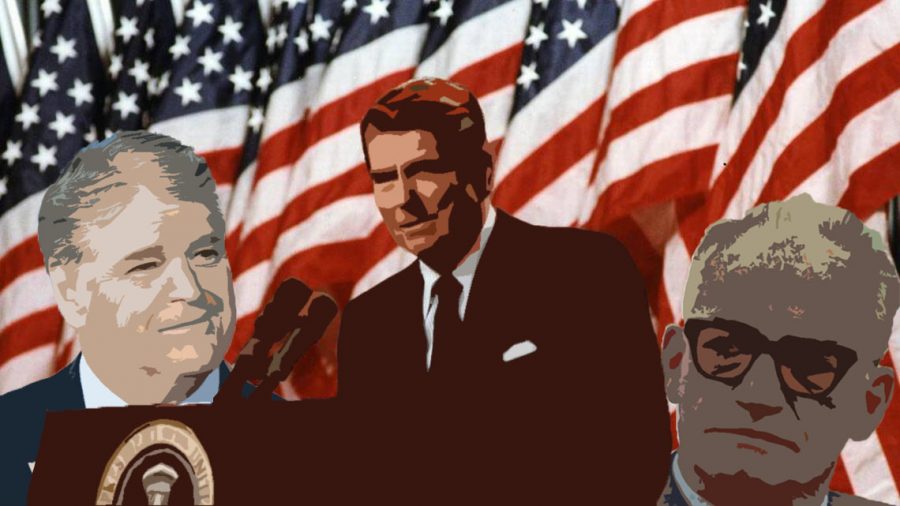 Barry Goldwater, Ronald Reagan and leaders of conservative media — like Sean Hannity — are responsible for the spread and development of conservatism in America.

Conservatism has dominated the American political scene for most of our lifetimes – compared to every other country on the planet, America’s Overton window is drastically shifted to the right. Our political scene hasn’t always been like this, and context is important to understand the broader effects that conservatism is having on the country as a whole. The first developments of modern conservatism began as a response to FDR’s New Deal, but it was popularized in the ‘70s and ‘80s — by politicians like Barry Goldwater and Ronald Reagan — and has seen a large growth in popularity in recent years due to conservative media through the likes of Rush Limbaugh, Tucker Carlson, Sean Hannity and Kenneth Copeland.

Typically when a political movement garners the amount of support and cult-like following that American conservatism has, it signals some genuine merit to the argument that the movement is trying to make. Conservatism, however, has gained its support by feeding off of fears and prejudices and capitalizing off of religious values.

Jerry Falwell — a televangelist who was responsible for a lot of the spread of conservatism in the late ‘70s and the ‘80s — is a perfect example of this. Falwell formed the Moral Majority — a political organization that capitalized off of its adherence to Christian values in order to garner support for the Republican Party. The Moral Majority merged with the other wing of the Republican Party (rich, upper-class, fiscal conservatives — think Mitt Romney) to form a massive voting bloc in the ‘80s: thus the Conservative Coalition was founded. Their values would be revolutionized by Reagan throughout the ‘80s, but the movement’s core values never changed: it revolved around an adherence to old values and a resistance to new reforms. In essence, they wanted to conserve traditional values. This was where conservatism’s largest flaw arises: it had become the antithesis of progress.

Conservatism’s most fundamental flaw comes in its absolute lack of any form of dynamism. This stems from the ideology’s reactionary nature. Since modern conservatism developed in response to social, cultural and civil reforms, the core of the ideology is focused around the idea of returning to traditional values and pushing back against progressivism. During the dawn of modern conservatism, this progressivism was seen in the form of the New Deal, civil rights legislation, anti-war sentiment, environmentalism, desegregation laws and countless other social reforms that we consider to be common-sense legislation today. Nonetheless, modern conservatism is still opposed to the exact same form of progressivism that is still focused on the same core ideas: social programs, anti-war values, environmentalism and other civil reforms.

The point is that in order to better American society, we need to focus on progress. This seems like common sense, but the conservative movement’s inability to adapt to social stimuli over the last half-century should be enough evidence that it isn’t. Continuing to adhere to the idea that we need to return to the past is inherently un-American. The spirit of all American values lies in innovation, dynamism and progress, and the conservative movement’s desire to return to traditional values is antithetical to all of those.