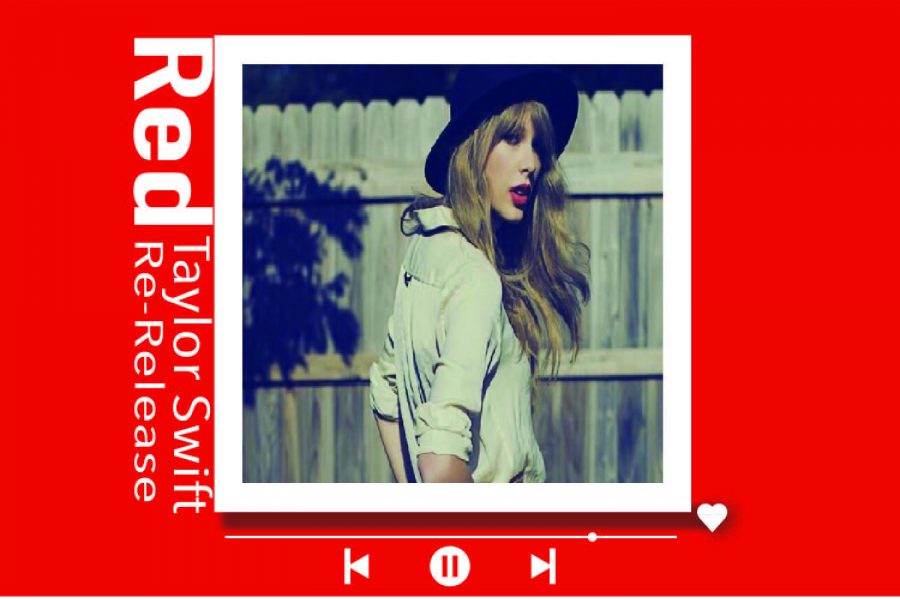 From country to pop, and everything in between, Taylor Swift has ruled the music industry. Succeeding the release of three new albums in the span of two years, and the re-release of her sophomore album, Swift has surpassed fans expectations once again after dropping the re-recording of her chart-topping album, Red. Since the release, I have compiled my thoughts to give a full-album review.

Identical in title and lyrics, the first 20 tracks of Red (Taylor’s Version) pay tribute to her original album, currently owned by Scooter Braun. After listening to these first few tracks, it was made clear that Swift was not only reclaiming her music legally but stylistically as well. Overall, Red (T.V.) feels cleaner in vocal production. With this, however, the song’s integrity remained the same. I’d like to give a special note to a couple of songs, as they exceeded my expectations. Starting with Taylor’s version of the original Red lead single, “We Are Never Getting Back Together”, I was thoroughly impressed. Its first release topped the charts, and it’s feasible to assume that this new version will do the same as it has maintained the exact vindictive edge that was portrayed in the original. Secondly, I was pleasantly surprised with  “Girl at Home (Taylor’s Version).” Originally released on the deluxe album, this song has always resided at the bottom of my rankings. However, the revamped back-track ultimately gives it a more pop-esque feeling. While I still don’t think this track will frequent my playlists, I was happy to see some improvements made. Comprehensively, Swift’s mature voice and style changes made for an entirely new listening experience, one that I found to be pleasant, and maybe even preferable to the first time I listened to Red back in 2012.

Paying homage to the late 3-year old Ronan Thompson, who passed from childhood cancer,  Swift’s “Ronan” is just as heart-wrenching as its original release. While Swift had released “Ronan” as a single back in 2012, I think that it found its home on the Red (T.V.) album.

While I was always a fan of Little Big Town’s recording of “Better Man” I can confidently say that Swift has upstaged the country music group with her own recording. For years, fans had known that Swift had written “Better Man” and to finally hear it, in what I like to call its “Fearless”-Esque glory, was a moment to remember.

Featuring indie singer-songwriter Phoebe Bridgers, “Nothing New” encapsulates the feeling that many stars feel as they grow through their time in the spotlight. This song was a personal favorite for me, as it felt very introspective. Additionally, it was nice to see Bridgers get a prominent verse in the song, as Swift rarely features female artists.

Track 25: Message in A Bottle (Taylor’s Version) (From The Vault)

While listening to Red (T.V.) “Message in A Bottle” was the first song that made me question if I liked it. At first it felt like an extremely overproduced pop song, and maybe it is, but I listened to it a second time and actually found myself enjoying it. In an album full of heartbreak, it was nice to have an upbeat, optimistic song.

Track 26: I Bet You Think About Me (Taylor’s Version) (From The Vault) [feat. Chris Stapelton]

“I Bet You Think About Me” can best be described as the reminiscence of Swift’s “country era” Right off the bat, the first verse draws you in with a strong country dialect. Adding to this, the background vocals, featuring country-singer Chris Stapelton, really pull the piece together.

Ironically enough, “Forever Winter” most reminds me of a nice spring day. From the lyrics to the distinct instrumental track, the song flows in a pleasant way. Furthermore, the lyric “I’ll be summer sun for you forever” has made it to the top of my “Taylor Swift’s Best Lyrics” list.

Track 29: The Very First Night (Taylor’s Version) (From The Vault)

I tried to like “They Very First Night” but couldn’t bring myself to do it. The song as a whole reminds me of the sappy pop music that was regularly played on the radio in 2012. Lyrically, it’s not very strong, and I personally was just disappointed, as almost all other songs on this album exceeded my expectations.

The original “All Too Well” has always been a fan favorite, so when word got out that the original song was missing approximately 4 minutes of content, Swift fans went wild. When first playing this track, I thought there was no possible way that it could surpass the original. However, after listening to it non-stop since its release, I can fully confirm that I was wrong. While the original “All Too Well” played into the heart-broken feelings endured when a relationship ends, I think that the extended version dives into the anger felt simultaneously.

Closing Thoughts + A Message From Taylor

Just as Swift mentions in her closing message, “A Message From Taylor” Red (Taylor’s Version) truly does encapsulate the complex feelings of a heartbroken individual, but even so the album finally feels like a unified piece, something that was arguably missing from the original Red. All in all, the album can be described best by Swift herself: happy, free, confusing, lonely, devastating, euphoric, and wild.